According to Zillow’s report, the rate of negative equity improved in all of the 35 largest housing markets in the first quarter of 2015, which Zillow says is a sign that the country is continuing to recover from the “lax lending rules” and crash of the housing market.

Per Zillow’s data, at the peak of the crisis, more than 15 million homeowners owed more on their mortgages than their homes were worth. Since then, foreclosures, short sales and rapidly rising home values freed nearly half of those homeowners, leaving 7.9 million homeowners upside down at the end of Q1 2015, according to Zillow’s report.

But of those that are still underwater, over half – about 4 million owners – still owe 20% more than the value of their home, making it difficult for them to get out from under their mortgage.

“It’s great news that the level of negative equity is falling, but what really worries me is the depth of negative equity. Millions of Americans are so far underwater, it’s likely they may not regain equity for up to a decade or more at these rates,” said Zillow Chief Economist Stan Humphries.

“And because negative equity is concentrated so heavily at the lower end, it throws a real wrench in the traditional housing market conveyor belt. Potential first-time buyers have difficulty finding affordable homes for sale because those homes are stuck in negative equity,” Humphries continued.

“And owners of those homes can’t move up the chain because they’re stuck underwater in the entry-level home they bought years ago,” Humphries said. “The logjam at the bottom is having ripple effects throughout the market, and as home value growth slows, it will be years before it gets cleared up. In the meantime, we’ll be left with volatile prices, limited inventory, tepid demand, elevated foreclosures and a whole lot of frustration.”

Click the image below for a look at negative equity situation in the top 35 markets. 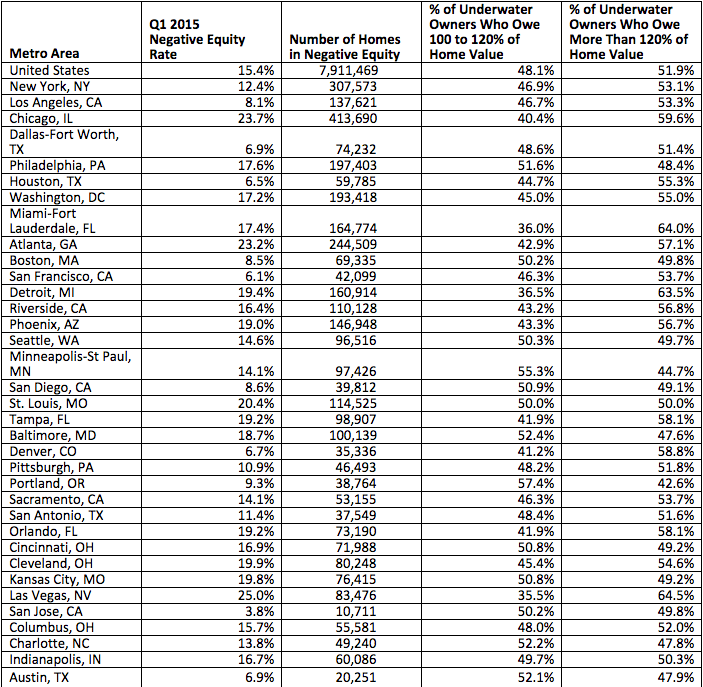