The average down payment for single-family homes, condos and townhomes purchased in the first quarter fell to 14.8% of the purchase price, a slight dip from 15.2% the previous quarter and 15.5% a year ago, RealtyTrac’s first quarter 2015 Home Purchase Down Payment Report said.

This is the lowest level since the first quarter of 2012.

“Down payment trends in the first quarter indicate that first time homebuyers are finally starting to come out of the woodwork, albeit it gradually,” said Daren Blomquist, vice president at RealtyTrac.

“New low down payment loan programs recently introduced by Fannie Mae and Freddie Mac, along with the lower insurance premiums for FHA loans that took effect at the end of January are helping, given that first time homebuyers typically aren’t able to pony up large down payments,” he continued.

At the end of last year, both government-sponsored enterprises announced their individual 97% loan-to-value products, in the government’s latest attempt to expand the credit box for first-time homeowners.

FHA loans as a share of loan originations increased throughout the quarter, from 21% in January, to 22% in February and to 25% in March.

Additionally, the share of low down payment loans — defined in the report as purchase loans with a loan-to-value ratio of 97% or higher, which would mean a down payment of 3% or lower — was 27% of all purchase loans in the first quarter, up from 26% in the fourth quarter and 26% a year ago. This marks the highest share since second quarter 2013.

The share of low down payment loans was increasing throughout the quarter, from 26% in January to 27% in February to 29% in March, according to the report. The overall volume of loans was also much higher in March compared to the first two months of the year.

Here’s a chart of the share of low and no down payment loans by quarter. 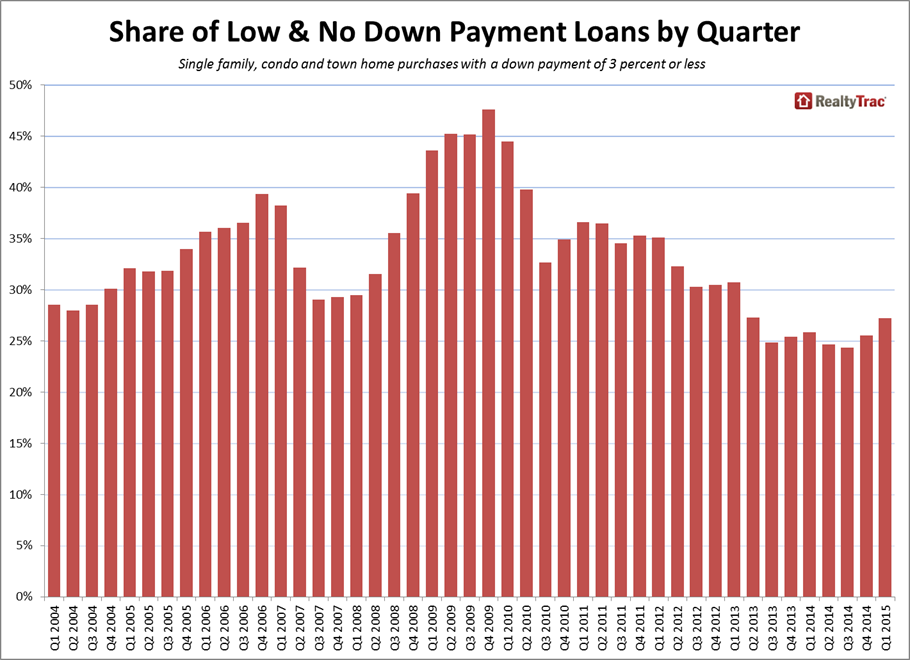