Monday Morning Cup of Coffee takes a look at news coming across HousingWire's weekend desk, with more coverage to come on bigger issues.

The driver of home sales is household formation, and the Mortgage Bankers Association’s analysts look at the issue, broken down by racial demographics, for the years 2004 through 2014.

“This week’s chart shows that household formation was negative for households with at least one adult under the age of 50 between 2004 and 2014 … The majority of these lost households were non-Hispanic white,” MBA’s analysts say. 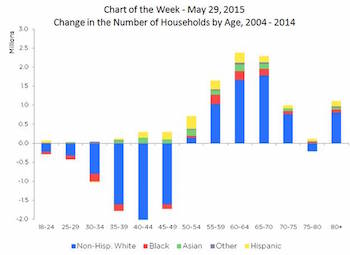 “Some of the loss in household formation was due to job loss and financial woes – individuals ‘doubled up’ and young people moved back home to save money resulting in fewer households. There was also a net loss of population between the ages of 35 and 49 after the Baby Boomers advanced into older age during this period,” MBA writes. “The simultaneity of the ill effects of the recession on younger people and the dip in the population of prime home-owning age households has contributed to single family housing’s slow recovery.”

The front page of the Saturday/Sunday issue of The Wall Street Journal (yes, the actual print version) ran with a full spread of how terrible this economic recovery has been.

It's well worth a visit if only to explore the informative charts and graphs that support the article's headline.

This quote sums it up nicely, though, for those not inclined toward the above suggestion:

“When you’re this weak, little things can knock you off course, whether it’s the Arab Spring…or ‘Snowmageddon,’" said Dan Greenhaus, chief global strategist at brokerage firm BTIG. “We have an incredibly weak economy that’s susceptible to momentary interruptions.”

Real estate isn’t a national market – it’s a million and one local markets, and there’s no single seller or buyer market for everyone. CNBC takes a look at which markets favor which side of the table, and what makes them hot.

As always in real estate, sellers need to know what the market will pay, and buyers need to make smart bids. In today's market, those truths are more acute than ever, as an increasing number of buyers compete for a dwindling number of listings. Even in a tight market, some homes will sit if not priced correctly.

So where are sellers in the driver's seat? No surprise, the Bay Area of California, where homes are selling for 108 percent of asking price on average, according to RealtyTrac. Sellers are also getting more than asking in Washington, D.C., Winston-Salem, North Carolina, and Cass County, North Dakota.

Buyers are more in control in St. Louis, Baltimore, Pittsburgh, Atlanta and Burlington, Vermont. Sellers are getting around 80 percent of asking price in these markets, even though supplies of listings are still limited.

The ongoing legal saga of “FannieGate” saw a couple of new developments.

Late last week, three GSE shareholders in Iowa filed a lawsuit against the federal government in federal court in Iowa, claiming the Third Amendment Sweep amounts to a breach of contract and illegally taking of property. The previous day, lawyers for Fairholme Funds filed formal arguments essentially rejecting the government's rationale for withholding relevant documents in a case being litigated in Federal Claims Court.

The suit in Iowa is the first time individual shareholders have challenged the legality of the Sweep; and the first since reports of leaked Treasury documents have raised new questions about whether relevant information was withheld in the Fairholme case and another suit related to the sweep.

In the new suit, three shareholders accuse the Federal Housing Finance Agency of five violations of the Housing and Economic Recovery Act by:

What this boils down to is the plaintiffs allege that, by following the direction of the U.S. Treasury to enact the Third Amendment Sweep, FHFA acted unlawfully, which has resulted in the federal government illegally taking private property.

HousingWire will reach out to the GSEs and the FHFA to comment on these developments and will follow-up with any new information on Monday.

Construction spending has been very weak but life is expected to appear in the April report with the consensus calling for a solid 0.7% gain. Expectations are tied to strength for private residential construction given the huge surge in April housing starts and permits. That comes on Monday.

The employment situation is expected to be solid in May, and at 220,000 for nonfarm payroll growth, it would be virtually unchanged from April's 223,000. The forecast range is relatively narrow, from 190,000 to 289,000 which points to a sense of certainty among the sample.

Hawks at the Fed, keyed up on the first signs of wage inflation, will keep an eye on average hourly earnings, which are expected to rise a notch but by a still moderate plus 0.2%.

No banks were closed the week ending May 29, according to the FDIC.