In October 2014, the Market Conditions Indicators put that number at four.

Then, as is the case now, at least half of the overvalued markets are in Texas.

CoreLogic Market Condition Indicators evaluate whether individual markets are undervalued, at value, or overvalued based on a number of economic variables.

The chart below shows the average of the gaps between home prices and their long-run sustainable level in the largest 100 markets, weighted by housing stocks. 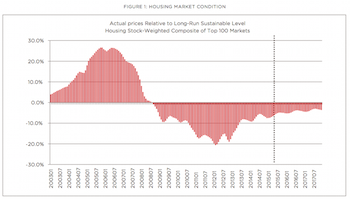 By the end of 2017, the gap between CoreLogic HPI and the sustainable level is forecasted to be 3.5%.

On the list are all four large metro areas in Texas — Austin, Houston, Dallas and San Antonio — where an oil and gas boom has fueled job growth and population growth, pushing home prices well above their sustainable levels. That boom may also last a little longer, as the state recently put an end to local government's ability to ban fracking.

Home prices in these four markets are also well above their historical peak levels: 26.9% for Austin, 18.3% for Houston, 14.8% for Dallas and 8.4% for San Antonio. Of the other three overvalued metros, Miami, Fla. and Washington, D.C. were on the list in October; Charleston, S.C., is a new addition.