Vowing that Move (MOVE) will spend more than it has ever spent on a branding, advertising and marketing campaign, Move CEO Ryan O’Hara on Tuesday rolled out a star-studded Realtor.com strategy that shows how new owner News Corp (NWS) is going to “turbocharge the results” in the realtor.com war for listings and ad dominance with Zillow Group (Z).

O’Hara told HousingWire on Tuesday that realtor.com “aspires to be the home for all things real estate” and to achieve that goal it is undertaking its biggest and boldest marketing initiative in 20 years.

“This is a combination of our marketing techniques with News Corp’s assets,” O’Hara said.

O’Hara previewed the new campaign in his keynote remarks to more than 2,000 industry leaders and real estate professionals gathered at the 2015 Realtors Legislative Meetings & Trade Expo.

The News Corp acquisition of Move and the merger of Zillow and Trulia have changed the game in the online listings and advertising marketplace.

At stake in the “fight between behemoths,” as O’Hara put it, are ads and listings that exceed $9 billion.

This new, comprehensive offensive is being launched even as recent growth in mobile and web traffic has pushed Realtor.com into the No. 2 spot against Zillow in terms of total traffic.

“Growth for the company over last four months has been faster than it’s ever been,” O’Hara said. “The team is more focused and has a clearer purpose.”

One part of the new campaign is the new logo for realtor.com – a stark red and black with the “REAL” in the word in red.

Further, the new logo is meant to convey the point that realtor.com stresses as its strength the accuracy of its information over what it says is “conflicting or inaccurate” information.

“Realtor.com stands for what is real in real estate,” the marketing material states.

“Serving buyers, sellers and renters of properties with the best information and tools anytime, anywhere and communicating the value brokers and agents provide as trusted guides through the process is our utmost priority,” O’Hara said. “This is what we mean by what’s real in real estate – and what sets us apart.”

The biggest battleground for consumers will feature a series of television ads and a web series starring Emmy-nominated actress Elizabeth Banks, a Hollywood favorite in such box office powerhouses as Pitch Perfect 1 & 2, The Hunger Games series, and The 40-Year-Old Virgin, among many other acting, producing and directing credits. 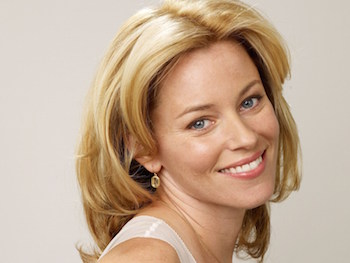 Regarding her interest in participating in the realtor.com campaign, Banks said in a written statement, “I’m a little house obsessed and looking for a new home right now, which made the opportunity to work on the new realtor.com ad campaign a great fit. I love the accessibility of realtor.com. My husband and I email each other photos of houses to look at and the other person can pull them right up – no matter where they are. The realtor.com app literally allows you to take the home buying experience with you everywhere in your daily life.” 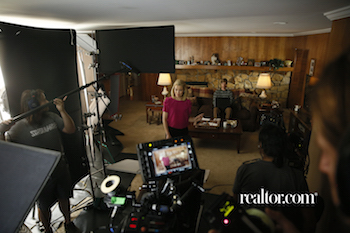 The new realtor.com campaign – which is unified by the tagline “real estate in real time” – was created by Pereira & O’Dell New York, the company’s advertising agency, under the direction of Andrew Strickman, Move’s head of brand and chief creative.

“She’s not playing a character. She’s playing herself,” Strickman said. “A real-estate obsessed version of herself, but that’s her.”

O’Hara and Strickman previewed the ads and one part of the web series, which combine humor and education with a low-pressure sales pitch that’s more focused on education than selling.

In the campaign’s first spot, called “Jim,” she observes the title character using the realtor.com website to find his dream home. “You’re a real-time real estate renegade there, Jim Bob,” she says.  “An arbiter of accuracy. A phenom of fresh listings. A master of mortgage rates. A ruler of refinancing. An emperor of escrow. Jim, let’s live in that house together.”

The TV ads debut May 18 and will run across major broadcast networks and cable channels, including CBS – where a :30 slot has been secured on the eagerly anticipated final episode of the Late Show with David Letterman on May 20.

The web series featuring Banks will break later and all five episodes will be released around the same time.

The web series focuses on educating first-time buyers who have been slow to come to the table. The initial episodes don’t even mention getting a Realtor but rather teaching basics of homebuying in a humorous fashion.

“Given the audience we are trying to grow and the relative newness of that audience and they’re afraid of that part of the experience,” Strickman said. “Our job is to bring them in and introduce them to the service. More and more consumers start online in their real estate experience, and it’s really important to us that we introduce people to the experience in the right way. But once we’ve introduced them to the service, it’s the perfect time to teach them about choosing a Realtor.”

Realtor.com also plans to up its game in news and advice, with original editorial content shared across its partner platforms such as the News Corp properties like the Wall Street Journal, Barron’s and Marketwatch.

“We have that enhanced editorial content – it’s a strategic advantage and something consumers want. We’re up 600% on news and advice section in terms of traffic,” O’Hara said.

The TV spots and web videos were directed by Fred Savage, the Emmy- and Golden Globe-nominated actor, director and producer best known for his role as Kevin Arnold in the American TV series The Wonder Years. Savage’s directorial credits include episodes of the popular TV series Modern Family and It’s Always Sunny in Philadelphia, as well as the critically acclaimed kids’ shows Phil of the Future, Wizards of Waverly Place and Zeke and Luther.

Goldman Sachs: Home prices will rise another 16% in ’22

Home prices may not have reached their peak yet. Not even close. Goldman Sachs economists predict that they’ll rise another 16% by the end of 2022.