A new study from Zillow Group shows that home affordability among the least affluent third of Americans has worsened sharply over the past two years, as the housing market has recovered but incomes have not.

The disparity has placed homeownership increasingly out of reach for working Americans whose wages are lowest, even if they shop for the least expensive homes on the market.

This level of worsening housing affordability for the lowest earners comes as rental housing is less affordable than ever, forcing those who can’t afford to buy to face rapidly rising monthly rent payments.

Zillow’s latest analysis found that, while affordability has worsened for people with all kinds of paychecks, those making incomes in the bottom third are quickly falling further behind in affordability.

But the share of income lower wage earners can expect to put toward a house payment has jumped in the past two years, while it has remained unchanged for those who make more money. 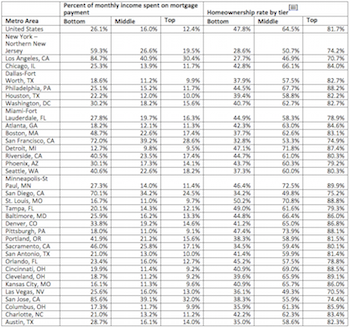 All but four U.S. housing markets are affordable for high-earning homebuyers shopping for homes in the top price tier. Low-earning home shoppers would expect to find even the least expensive homes unaffordable in 77 markets.

“This is a striking example of growing income inequality in America, as upper-tier incomes grow sufficiently to keep even very expensive homes affordable for the well-heeled, while wages among the working class increasingly fail to support the purchase of even the most modest homes,” said Zillow Chief Economist Dr. Stan Humphries. “At the same time, rising rents and stagnant wages are also making rental housing increasingly unaffordable. It is imperative that we find ways to create both meaningful wage growth for all workers, and increase the supply of affordable housing, and soon. If not, we run a real risk of the working class in America running out of affordable housing options, either to rent or to buy.”