While Americans are generally more positive about homebuying, they remain less optimistic than they were the past two years, according to a new survey from Gallup.

The latest Gallup survey is based on telephone interviews conducted April 9 to 12, 2015, with a random sample of 1,017 adults, aged 18 and older, living in all 50 U.S. states and the District of Columbia.

Currently, 69% of Americans say it is a good time to buy a house, down from an average 74% during the prior two years.

However, this level is similar to what Gallup measured from 2009-2012. Americans are still more positive about buying a house now than they were between 2006, when home values stopped rising and interest rates increased, and 2008, after the housing bubble. 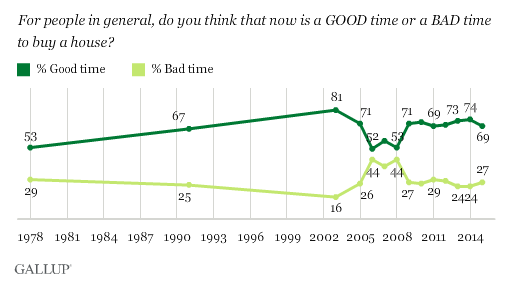 According to the most recent report from the National Association of Relators, existing-homes sales surged to their highest annual rate in 18 months, showing a promising beginning to the spring homebuying season.

This is positive news for the industry after existing-home sales collapsed 4.9% in January to the lowest rate in nine months, falling well below analyst expectations. And while they did pick up in February and edged up by 1.2%, there was still some stagnation in the market.

“Since 1978, Americans have generally been optimistic about the homebuying climate, with majorities saying it is a good time to buy even in times when the economy struggles, including after the housing bubble burst. Thus, the measure likely reflects the value Americans put on homeownership in addition to their views of the prevailing housing market,” the Gallup report said.