“Our measure of first-time buyers captures a broader set of the current renters transitioning to homeownership than does the NAR measure,” said Stephen Oliner, co-director of AEI’s International Center on Housing Risk.  “As a result, it provides a more accurate indicator of the impetus to single-family home construction and the resulting effect on economic growth.”

In March 2015, first-time buyers accounted for 56.6% of primary owner-occupied home purchase mortgages with a government guarantee, according to the Agency First-Time Buyer Mortgage Share Index. The March share was slightly above the revised share of 56% for February and a shade below the March 2014 share of 57.1%. As indicated in the chart below, the first-time buyer share has displayed no trend over its 24-month history apart from seasonal variation.

The First-Time Buyer Mortgage Share and Mortgage Risk Indexes are key housing market indicators based on monthly data for nearly all government-guaranteed home purchase loans, which greatly reduces the risk of sample error. By relying on millions of loans, this approach stands in contrast to traditional first-time buyer surveys based on small samples of homebuyers or real estate agents.

The chart below displays the monthly first-time homebuyer percentage by agency. As shown, the share varies widely across agencies.

Fannie Mae’s share has consistently tracked somewhat above Freddie’s and stood at 46% in March. 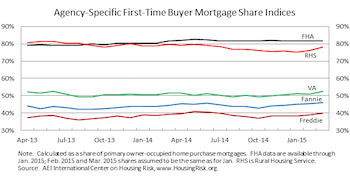 The Combined FBMSI (which measures the share of first-time buyers for both government-guaranteed and private-sector mortgages) stood at an estimated 51% in March 2015. Consistent with the agency series, the broader combined share has varied seasonally but has displayed no trend over its 24-month history.

The Agency FBMSI is calculated, as noted above, from a nearly complete dataset of government-guaranteed home purchase loans, which greatly reduces the risk of sample error. The near-universe of included loans stands in contrast to the 2014 survey of homebuyers and sellers conducted by the National Association of Realtors, which was based on responses constituting only 0.2% of all purchase loans originated during the 12-month survey period and was voluntary, with responses received from only 9% of those mailed the 127-question survey.

Data on the importance of first-time homebuyers for non-agency loans are not available to our knowledge from any source. The Combined FBMSI is calculated from the loan-level data in the Agency FBMSI, along with assumptions for the non-agency loans that we believe to be reasonable.

The Combined FBMSI percentage of first-time buyers is much higher than that estimated by the NAR.  For the July 2013-June 2014 period covered by the NAR’s 2014 survey of homebuyers and sellers, the Combined FBMSI showed an average share of 50 , substantially higher than the NAR’s survey result that first-time homebuyers took out 36% of the mortgages used to buy a primary residence. This gap largely appears to reflect a difference in the definition of first-time buyers.

However, even after accounting for the gap, the Combined FBMSI tells a very different story about the recent role of first-time buyers than does the NAR survey. As noted above, the Combined FBMSI shows that the first-time buyer share has changed little over the past two years apart from seasonal variation. In contrast, the NAR survey shows a sharp drop in the first-time buyer share for the July 2013-June 2014 period relative to the prior year. This drop appears inconsistent with the loosening of credit standards across those two periods and with the continued improvement in economic conditions.

AEI’s Agency First-Time Buyer Mortgage Risk Index estimates the share of first-time buyer mortgages that would default in a stress event comparable to the 2007-08 financial crisis based on the actual performance of loans originated in 2007. The Agency FBMRI stood at 15.14% in March, up 0.1 percentage point from the average over the prior three months and up 0.5 percentage point from a year earlier. As indicated in the chart below, the Agency FBMRI is nearly 6½ percentage points higher than the mortgage risk index for repeat homebuyers. 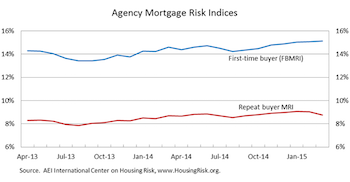 “The first-time buyer MRI hit a series high of 15.14% in March, moving deeper into the high risk loan category,” Pinto said. “Notwithstanding this fact, the NAR and Urban Institute continue to call for the making of even riskier loans to first-time buyers, many of whom would be lower-income and minority buyers.”

Moreover, the median FICO score in March for first-time buyers with agency mortgages was 705, slightly below the median of 713 for all individuals in the United States with a score. For first-time buyers with FHA-insured loans, the median FICO score in March was only 671, well below the middle of the distribution for the U.S. as a whole. These data are a strong counterpoint to the NAR's commentary that “interested homebuyers continue to find it challenging to obtain financing under tougher and more cautious credit standards.”

“One hears practically every day that first-time buyers have limited access to mortgage debt. The FICO data show this isn’t true; many borrowers with weak credit profiles are buying homes.” Oliner said.

ALL EYES ON PURCHASE In 2021, all housing professionals must be focused on the 3 P’s: Process, Profitability and Purchase. PPP may have meant something different in 2020, but this year the 3 P’s are the guiding light to long-term mortgage success and domination. The ratios flipped last year. Strong purchase lenders that historically did […]