The national foreclosure inventory declined by 27.3% and completed foreclosures declined by 15.7% from February 2014, according to the latest from CoreLogic (CLGX).

This is the lowest delinquency rate since June 2008. On a month-over-month basis, the number of seriously delinquent mortgages declined by 1.1%.

“The number of homes in foreclosure proceedings fell by 27% from a year ago and stands at about one-third of what it was at the trough of the housing cycle,” said Frank Nothaft, chief economist at CoreLogic. “While the drop in the share of mortgages in foreclosure to 1.4% is a welcome sign of continued recovery in the housing market, the share remains more than double the 0.6% average foreclosure rate that we saw during 2000-2004.” 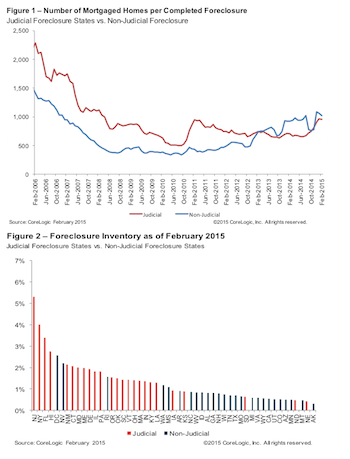 Vexed by work-from-home arrangements owing to the COVID-19 pandemic, homeowners are taking the long view and rethinking floor plans. The reality is, home offices are no longer a luxury. HW+ Premium Content