The yearly increase represents three years of consecutive year-over-year increases in home prices nationally. Meanwhile, wage growth has been stagnant for years, causing a great deal of concern among analysts.

"In terms of home price appreciation, this has been the hottest spring in nine years," said Anand Nallathambi, president and CEO of CoreLogic. "Home prices have now increased for 39 straight months as improved housing market and macro-economic fundamentals and tight supplies combine to support the positive trend. Assuming a continued benign interest rate environment, we expect home prices to rise by an additional five% over the next twelve months."

The chart below shows February 2015 national and state HPI, ranked by single-family, including distressed sales. 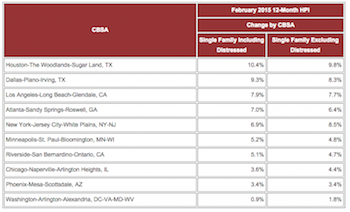 Highlights as of February 2015:

Nearly three months after data giant CoreLogic confirmed it was exploring multiple offers of acquisition the company is down to final two bidders.