A new study released by the American Enterprise Institute’s International Center on Housing Risk found that the seismic shift in home purchase loan originations away from large banks to nonbanks continued in February, and the mortgage risk is increasing.

The dramatic decline in the large bank-lending share has been met point-for-point by an increase in the nonbank share, which has risen from 24% to 51%.

Large nonbanks and other nonbanks each have accounted for about half of the 27-point increase in share.

This shift is due to the fact that nonbanks compared to large banks are more thinly capitalized and more lightly regulated, generally face less reputational and litigation risk, and tend to have a shorter term outlook.

Additionally, their primary business is generally just mortgage banking as compared to the more diversified business lines of large banks. Therefore they have a more limited ability to stay on the sidelines. 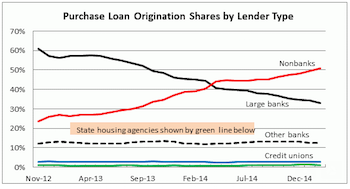 The chart below shows the mortgage risk index for each type of lender since the beginning of these series in November 2012.

The MRIs for large nonbanks and other nonbanks continued to trend up in February and are above the MRIs for all other lender types except state housing agencies.

Large banks, other banks, and credit unions all have MRIs below those for nonbanks.

In addition, large banks are the only lender type with a net decline in MRI since November 2012. 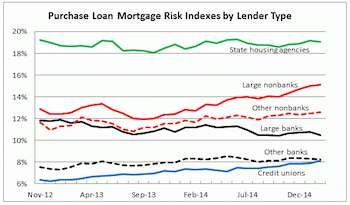 “The obligation that I have is to ensure that lenders using the FHA program are lending to as full a spectrum [down to 580] of the credit box as possible,” she said.

More recently, HUD Secretary Julian Castro said, “[W]e've undergone a yearlong effort to clarify our policies so that lenders can feel more confident in working with a wide-range of creditworthy borrowers."

AEI warns that the FHA loans that lenders are being encouraged to make have very high risk on average.

The mortgage risk index for FHA loans in February 2015 ranged from roughly 21% for large banks to 26% for nonbanks.