“So the FHFA numbers appear to be showing a moderation in price increases which we aren’t seeing in listing prices or median existing home prices,” said Jonathan Smoke, chief economist at realtor.com. “On the contrary other metrics are showing an acceleration in year-over-year prices that started in December and coincided when inventories started getting super tight.

“The FHFA number may be weaker because it is based only on government backed purchase mortgages and therefore doesn’t reflect jumbo mortgages on higher priced homes,” Smoke said. 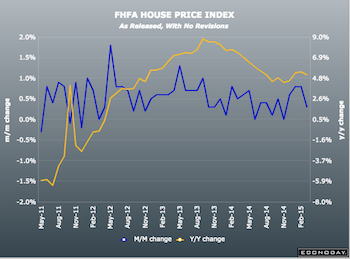 The 12-month changes were all positive, ranging from +1.7% in the Middle Atlantic division to +8.2% in the Pacific division.

The previously reported 0.8% change in December was revised downward to a 0.7% change.

The FHFA HPI is calculated using home sales price information from mortgages sold to or guaranteed by Fannie Mae and Freddie Mac.

The 12-month changes were all positive ranging from +1.7% in the Middle Atlantic division to +8.2% in the Pacific division.