There is a significant gap between the need for and the supply of affordable housing in the United States, according to a new report from the Mortgage Bankers Association.

The size of the gap can probably best be summarized by the dramatic fact that “more than a third of U.S. households live in housing that exceeds their means,” the report says. In addition to the financial burdens this gap places on families and communities, numerous studies have found direct links between affordable housing and positive health, education, economic and other outcomes. 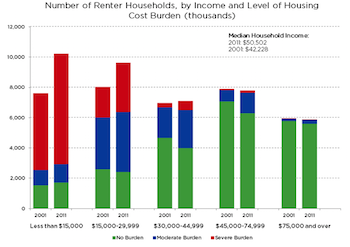 The MBA report cites 2011 data from Harvard University’s Joint Center for Housing Studies and the American Community Survey that shows there are more than 10 million households earning less than $15,000 per year, and some 8.5 million of these households — 83% — paid 30% of their income or more for housing.

The housing market faced a lot of uncertainty when COVID-19 caused the real estate industry to pause under shut-downs, but low interest rates and the desire for more space has turned this year into a boom time for real estate agents.

The NAR existing home sales report released today blew out all estimates with 6,540,000 in existing home sales. This epic headline punctured any bubbles the 2020 bubble boys had left in their arsenal. But before we get too excited, keep in mind we are still down 0.2% year to date compared to 2019 levels. Still, this seems like a booming housing market, right?