It’s beginning to look like Google (GOOG) launching a mortgage payment calculator was the first step in a much larger plan to expand the online giant’s footprint in the mortgage market.

According to a report from Gigaom, Google is preparing to launch a mortgage comparison tool via its Compare service. Currently, the U.S version of Google’s Compare service only allows users to compare different credit cards.

When a user visits the U.K. version of Google Compare, they are greeted with the following under the mortgage section –

After selecting a “mortgage purpose” from choices including purchase, remortgage and first-time buyer, and entering a mortgage amount, a user sees the screen below, which allows them to enter a property value.

The tool also provides a repayment period, property location and other information.

Note that “Mortgage Calculator” is the main choice on the page other than “Search Mortgages.” 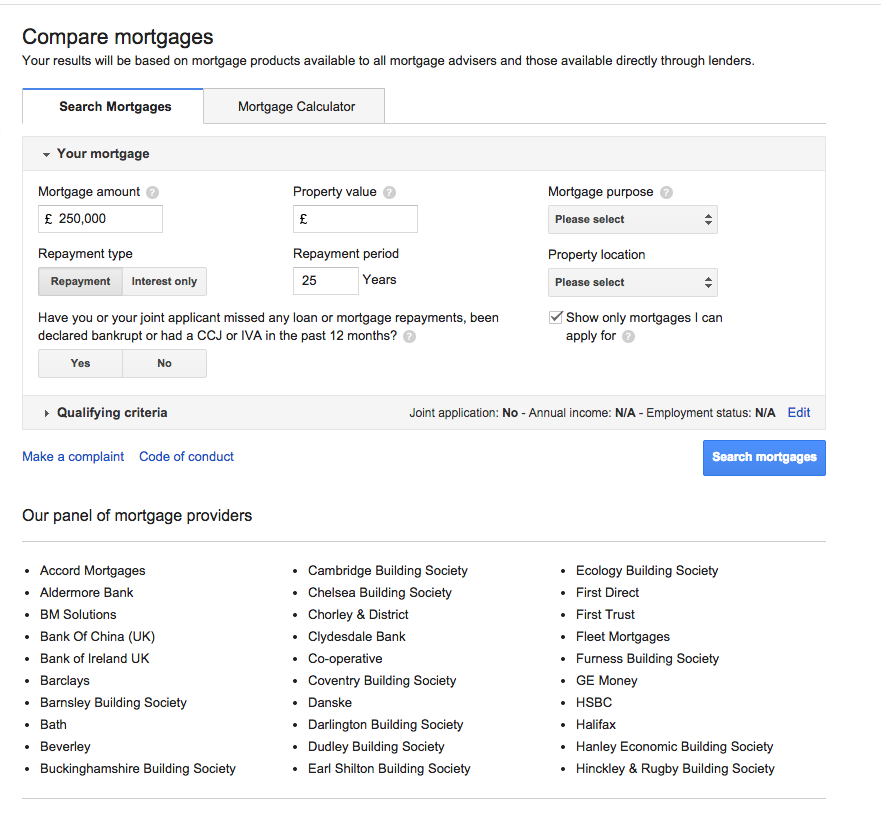 After entering pertinent information, the user is given a myriad of mortgage options from a list of 81 lenders including Barclays, HSBC, Royal Bank of Scotland, Santander, Virgin Money and more.

According to the Gigaom report, Google is currently seeking to hire mortgage specialists in both the Bay Area and Seattle to assist in the project. The job posting for mortgage specialist is found on LinkedIn, and lists three years as a “licensed loan originator, or as an originator with a financial institution” as one of the minimum qualifications.

So why is Google doing all of this? The answer is advertising dollars, according to Gigaom.

From the Gigaom report:

Compare is an ad product at its core, meaning that Google earns money every time a consumer takes an action based on its recommendations. The more money at stake, the higher is Google’s potential cut, which is why mortgages are especially interesting.

As part of the “Owning a Home” consumer tool, the CFPB included “Rate Checker,” which it touted as a tool to help consumers understand what interest rates may be available to them by using the same underwriting variables that lenders use on their internal rate sheets.

Essentially, mortgage bankers said that if the Rate Checker were a lender advertisement or mortgage calculator, it would violate the CFPB’s disclosure rules.

“It sets borrowers up for severe disappointment,” David Stevens, president and CEO of the Mortgage Bankers Association, told HousingWire. “It should be taken down.”

Now that Google appears to be preparing to give mortgage lenders the opportunity to advertise their mortgage rates, the competition for borrowers just got a whole lot more interesting.

As housing supply has reached a new low, competition between buyers has reached a high. Now, the latest survey from Redfin shows real estate agents are also feeling the crunch.

ClosingCorp time studies show clients saving on average 45 minutes per file and $25 to $45 per loan.