Luxury home price growth slowed significantly in the fourth quarter of 2014, according to a report issued by Redfin, the customer-first real estate brokerage.

For homes priced within the top 5% in Redfin markets, prices in the fourth quarter grew only 3% year over year, after growing 16% during the first three months of the year.

But Redfin saw significant regional variation across its markets. 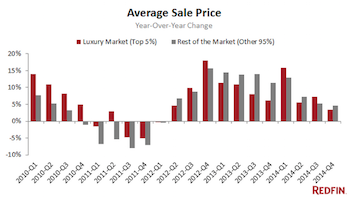 For example, luxury home prices in Miami Beach rose 66% from the previous year, boosted by an influx of buyers from Europe and South America, while in Boulder, Colorado, they declined by 18%.

“Locals haven’t been part of the party,” said Aaron Drucker, a Redfin agent in Miami. “In Miami Beach, downtown and in Brickell, many condos are empty and most sales are in cash because they are second, third or even fourth homes for foreign owners and the U.S. elite who want to preserve their wealth in U.S. real estate.” 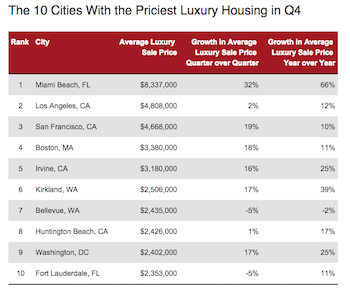 Other cities with double-digit luxury home-price growth in the fourth quarter include Kirkland, Washington (39%), Sugar Land, Texas (38%), and Alexandria, Virginia (28%).

In Delray Beach, Florida, and Boulder, Colorado, luxury home prices plummeted 18% year over year, while prices in the rest of the market increased 12% and 5%, respectively.