It’s easy to get caught up in the generalities, as if there’s such a thing as “the real estate market” instead of millions of them, or thinking that the general stats for a whole metro area tell the story of the whole of it.

Curbed San Francisco has a cool, neighborhood-level home price appreciation map that looks at the past decade.

And while there are areas with astronomical price increases – as one would expect in a metro like San Francisco – there are plenty of areas within the metro that have seen price stagnation and even declines. 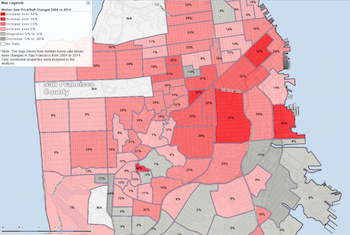 Trendy neighborhoods like Duboce Triangle and the Mission District have seen price jumps of around 50%, but that’s not the case on the southern fringes

Neighborhoods on the city's southern fringes have seen the smallest price increases, and in many places prices have even gone down. The narrow Lakeside neighborhood, squeezed between Ingleside Terrace and Stonestown, has seen a big 59 percent drop over 10 years. Larger neighborhoods like Bayview and Hunters Point have experienced more modest 11 percent and 8 percent drops, respectively. The only neighborhood outside of the city's southern reaches to see lower prices is Alamo Square, where prices have gone down 14 percent, although Russian Hill has also been flat.