A client note from Goldman Sachs (GS) says the fundamental case for improvement in the housing sector remains strong, and the recent data mostly look encouraging.

“We therefore expect a pickup in housing activity–along with the oil-driven improvement in consumer spending growth–to offset the negative impact of the stronger dollar on net exports, helping to keep real GDP growth around 3% in 2015,” Goldman Sachs says in a client note.

“We expect a big further increase in housing starts from 1 million in 2014 to 1.5-1.6 million by 2017-2018. This is an important input into our view that US GDP growth will remain around 3%,” Goldman says. “Although the pace of housing recovery last year was disappointing, the most recent news in two key areas looks more positive.”

First, they say, the highest-frequency measure of US household formation picked up sharply at the end of 2014.

“Although the data are noisy and the most recent print almost certainly overstates the underlying trend, it is encouraging that the incoming information is now more consistent with our recent analysis suggesting a sizable amount of upside for household formation,” they say.

“Second, mortgage credit availability seems to be improving gradually,” they write. The pace of the housing recovery disappointed expectations in 2014. Housing starts and home sales edged up only slowly, and residential investment barely contributed to GDP growth.

Two factors have been widely blamed for the weakness, namely weakness in household formation and the difficulty of obtaining mortgage credit.

The analysts say that as mortgage lending standards have started to ease more noticeably, it is reflected in their new composite measure of residential lending standards calculated from the Fed's senior loan officer survey.

This measure splices data from three different survey designs. From 1990Q2 to 2007Q1, the survey asked about changes in standards for residential mortgage loans without any distinctions between different types of loans. 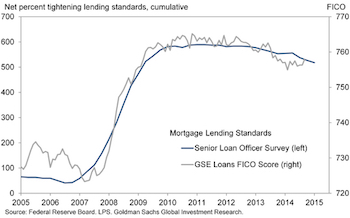 “From 2007Q2 to 2014Q4, the survey asked about changes in standards in three different loan categories, namely prime, nontraditional (alt-A), and subprime loans.

Goldman analysts calculate the weighted average of changes in standards using the dollar amount of originations over the prior four quarters as weights for each of the categories.

“Our composite series shows that lending standards have generally eased since 2012, especially in the last three quarters. Although this easing still pales compared to the dramatic tightening during the crisis, it is starting to look more meaningful,” the note says. “The gradual improvement is also visible when we cumulate the quarter-to-quarter changes in standards and plot them against an alternative measure of credit availability calculated as the average FICO score on new GSE-eligible loans.”

Standards according to both measures have been easing gradually since 2012-2013, and the pace seems to have picked up a bit in recent quarters.

“So why does the recent news only merit two not three cheers? The reason is that it is still unclear whether the improvement in the household and credit fundamentals is really feeding into stronger housing activity,” they say. “Our composite measure of changes in residential mortgage loan demand–calculated using the same method from the loan officer survey–showed another decline in 2015Q1. Moreover, the homeownership rate continues to plummet; as of Q4, it was down 1.2 percentage points year-on-year, the biggest decline in the nearly 50-year history of the series. Cutting against this, mortgage purchase applications have improved recently and are in positive year-on-year territory for the first time since 2013, and the most recent housing starts and home sales numbers have also started to pick up a bit more significantly toward the end of 2014.”

The bottom line is that the good news in the housing sector outweighs the bad, they say.

The average 30-year fixed-rate mortgage rose nine basis points from the week prior to 3.02%, according to data released Thursday by Freddie Mac‘s PMMS. This is the first time in ten weeks mortgage rates have risen above 3%.