Sales of new single-family houses in December 2014 were at a seasonally adjusted annual rate of 481,000, according to estimates released jointly today by the U.S. Census Bureau and the Department of Housing and Urban Development.

The remarkably high print immediately brought skepticism in some quarters, noting that Census has revised downward its estimate seven months in a row.

“The reason for our disbelief? Because as we have been tracking for the past 6, and now 7 months, every single such euphoric print since May of 2014 has been revised substantially lower after the fact (and after the headline-scanning algos promptly gobbled up stocks on the initial "beat"), and sure enough, the November print of 438K, was also just "revised" downward to 431K,” writes Tyler Durden at ZeroHedge. “Putting today's "highest in 7 years" new home sales print in context: consider that in May 2014 the same data series was originally reported at 504K… only to be revised to 458K” 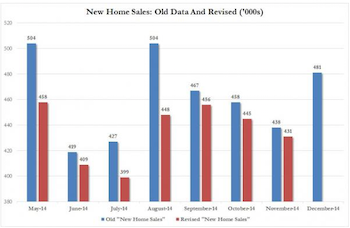 The seasonally adjusted estimate of new houses for sale at the end of December was 219,000. This represents a supply of 5.5 months at the current sales rate.