"The foreclosure rate fell in every state, with only the District of Columbia seeing a small increase," said Molly Boesel, senior economist. "However, some states still have foreclosure rates of more than twice the national rate. While the national level of foreclosures may normalize in the next two years, there will always be the potential for some pockets of distress in the mortgage market." 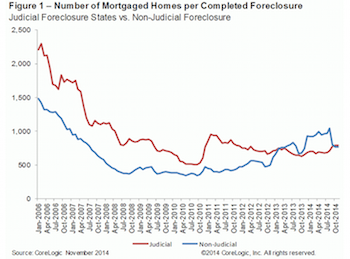 On a month-over-month basis, the foreclosure inventory was down 3.3% from October 2014. The current foreclosure rate of 1.5% is the lowest inventory level since March 2008.

"The number of completed foreclosures over the past twelve months–just under 575,000–are at the lowest level in seven years. This month's figure of 41,000 foreclosures is in line levels experienced in the second half of 2007, which was the very beginning of the housing crisis," said Anand Nallathambi, president and CEO of CoreLogic. "At current foreclosure rates, we expect to see the foreclosure inventory in the U.S. to drop below 500,000 homes sometime in the first quarter of 2015 which would be another milestone in the healing of the housing market."

Highlights as of November 2014: