This is the sixth consecutive month that home-value opinions have moved closer together, with the gap narrowing each month since July 2014.

The Home Value Index shows that values posted a slight decrease from November to December 2014, falling 0.74%, according to the national composite. This is the first monthly decrease in 10 months. However, home values increased 2.26% in December when compared to December of 2013.

“As a national mortgage lender, it is always encouraging to see more Americans understanding the housing market,” said Bob Walters, Quicken Loans chief economist. “From the HPPI, it is clear that homeowners are more aware of the state of the home values in their neighborhood, as homeowner estimates and appraiser opinions continue to approach equilibrium. A part of this awareness is due to the relative stabilization in prices we’ve seen in the last few months; it will be interesting to see if perceptions remain close if we see more dramatic shifts in home values in 2015.” 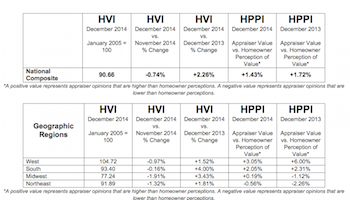 The Quicken Loans HPPI, a first-of-its-kind look at the difference between appraiser and homeowner opinions of home values, shows that appraisers’ home value opinions in December were 1.43% higher than homeowners’, according to the national composite. This shows that the gap between the two estimates is narrowing compared to November 2014, when appraisers valued homes 1.56% higher than homeowners’ estimates. The values are also closer together than they were a year ago, when the difference was 1.72% in December 2013.

Appraisers in more than 77% of the metro areas examined by Quicken Loans still have higher opinions of home values than owners do, although the gap widened in 55% of the metro areas. The areas where the two opinions are closest together are Baltimore, Maryland, with appraiser values 0.46% higher than owner estimates, and Chicago, where appraised values are 0.14% lower than homeowner opinions.

“There should not be much emphasis put on the fact that values have fallen slightly over any one-month period of time; in a healthy economy it is common to see some volatility in month-over-month numbers,” Walters continued. “We will keep a close eye on the annual home value change. While some argue that these declines are merely a correction to previously over-inflated home values, if the trend continues it could be bumpy for homeowners.”