The median sales price of U.S. single family homes and condos in October was $193,000, up 2% from the previous month and up 16% from a year ago to the highest level since September 2008 — a 73-month high, according to RealtyTrac.

“This U.S. recovery is largely being driven by investors, and as the lower-priced, often distressed inventory most appealing to investors dries up in a given market, investor activity will slow down in that market and move to other markets with more ideal inventory available,” said Daren Blomquist, vice president at RealtyTrac. “This has created a ripple-effect recovery moving out from traditional investor hot spots such as Phoenix, Atlanta and many California markets and into markets such as Charlotte, Columbus, Ohio, Dallas and Oklahoma City.

“More than 32% of all single family homes and condos purchased so far in 2014 are non-owner occupied compared to 68% that are owner-occupied,” Blomquist said. “That is the highest share of investor purchases since we began tracking in 2001.”

Among 97 metropolitan statistical areas with a population of 500,000 or more with sufficient home price data, 20 have reached new post-recession median sales price peaks in 2013 or 2014, including Denver, Pittsburgh, Columbus, Ohio, and Charlotte. 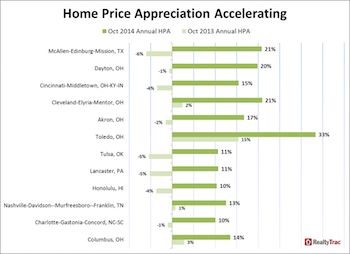 “Home prices have risen substantially in the lower price ranges — generally under $400,000.  That has led most underwater properties out of trouble,” said Phil Shell, Managing Broker of RE/MAX Alliance, covering the Denver market, where median home prices reached a new post-recession peak in July 2014.  “We are seeing a ‘compression’ in the market because we are experiencing record low inventories.  Prices on the low end are coming up, and while the high end is not necessarily coming down, it has flat-lined.  So we are seeing prices compress in the middle.  A homeowner wanting to move up into the market at $550,000 or above will find substantial value and a terrific opportunity.” 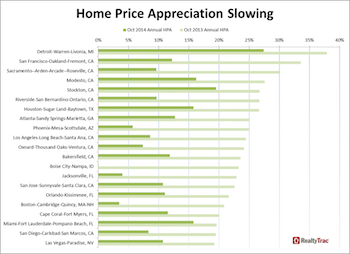 “The demand is strong for a lessening distressed inventory and pushing prices to their highest level since 2008,” said Mike Pappas, CEO and president of the Keyes Company, covering the South Florida market.

For a more detailed breakout of the RealtyTrac report, click here.

With rapid change in the industry, real estate agents can choose to fight for the status quo or they can evolve and adapt, HousingWire Columnist Dustin Brohm writes.

Last December, home prices climbed by 4% from the previous year, according to CoreLogic. By the end of this year, the company projects they’ll increase by 5.2%.