The economy slowed in October, with much of the drag coming from a weakness in housing and consumption and a slowdown in employment growth and production, according to the Chicago Fed National Activity Index.

The national activity index printed at 0.14 in October, down from a downward revised 0.29 in September.

The CFNAI ranges as low as negative 5, with the worst of the financial crisis in 2009 seeing it around 4.5.

The October decline also pulled down the 3-month average from September's downward revised plus 0.12 to minus 0.01.

The minus 0.01 reading means that the nation's economic growth, going into this month, was trending no better than at its historic average. 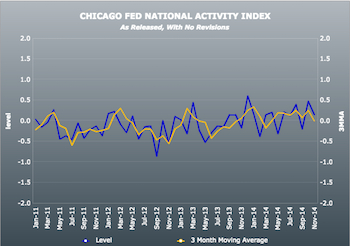 The employment component fell to plus 0.16 from 0.22 as nonfarm payroll growth slowed to 214,000 from September's 256,000. In a plus, contributions from the two other components – sales/orders/inventories and consumption & housing – both improved slightly though consumption and housing, pulled down by stubborn weakness in housing starts, does remain in the negative column at minus 0.12.

The production component, at minus 0.01 vs October's plus 0.18, is most responsible for October's weakness, a decline tied to a sharp fall in both mining and utility output in the industrial production report.