The housing market is about to turn a corner into the new year, and according to Freddie Mac, the U.S. economy is well poised to sustain about a 3% growth rate for 2015.

This would only be the second year in the past decade with growth at that pace or better.

The positive news from Freddie is based on several factors:

As a result, the Freddie Mac November Economic and Housing Market Outlook said, “The economy will produce more and better paying jobs, providing the financial wherewithal to support household formations and housing activity.”

It’s not all good news though.

The dollar will likely strengthen in 2015, which may dampen U.S. exports. And the Federal Reserve is likely to start boosting the federal funds target rate in 2015. And don't expect much help from the housing and mortgage industries either. But there are some areas where we can predict some improvement, and some setbacks.

“While higher interest rates generally detract from housing activity, when they occur with strong job and income growth the net result can be increases in household formations, construction, and home sales,” the report said. “Our view for 2015 is exactly that, namely, income and job growth offset the negative effect of higher interest rates and translate into gains for the nation’s housing market.”

Here are Freddie’s five predictions for 2015 in charts: 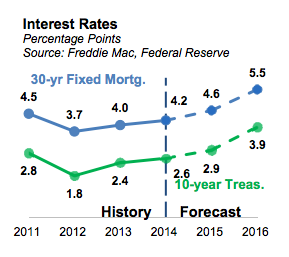 Interest rates are forecasted to climb throughout 2015, averaging about 2.9% for 10-year Treasuries and 4.6% for 30-year mortgages. 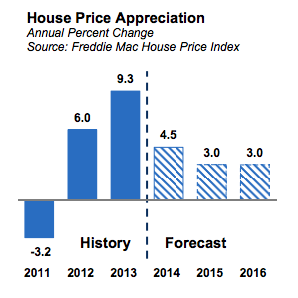 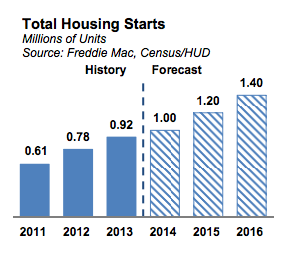 Total housing starts are projected to increase 20% from 2014 to 2015, in addition to total home sales growing by about 5% over that time period. 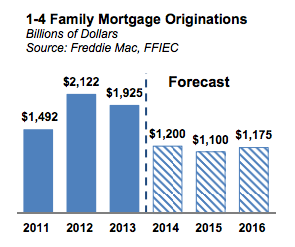 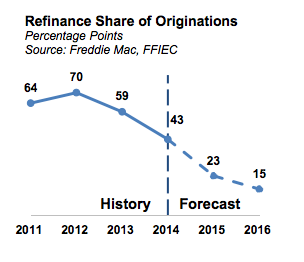 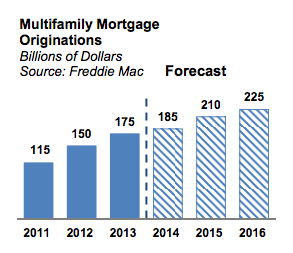 Multifamily mortgage originations have risen about 60% between 2011 and 2014, which is projected to further increase in volume into 2015.

For an added perspective and bonus, click the next page to see how last year's predictions turned out.

Looking back, here is the prediction that was given for 2014.

"With the close of 2013 will also come a major transition in the housing finance industry," said Frank Nothaft, Freddie Mac's chief economist and vice president. "For the first time since 2000, we're going to see the mortgage market dominated by purchase activity as the refinance share drops below 50%."

"And with mortgage rates rising, we're also going to see the home sales gains as well as the impressive house price growth begin to moderate to more sustainable levels," he added.

However, the prediction for 2014 included at least one piece that didn’t come into fruition:

“Freddie Mac expects interest rates to steadily rise throughout 2014, with the 30-year, fixed-rate mortgage ending the year near 5%.”

The most recent Freddie Primary Mortgage Survey reported that the 30-year, fixed-rate mortgage continued to hover around 4%, a whole percentage point down from the prediction.