Firming home prices in markets across the country contributed to a slight dip in nationwide housing affordability in the third quarter of 2014, according to the National Association of Home Builders/Wells Fargo Housing Opportunity Index.

Despite this, home sales have actually picked up somewhat, especially in October.

In all, 61.8% of new and existing homes sold between the beginning of July and the end of September were affordable to families earning the U.S. median income of $63,900. The HOI in the second quarter was 62.6%. 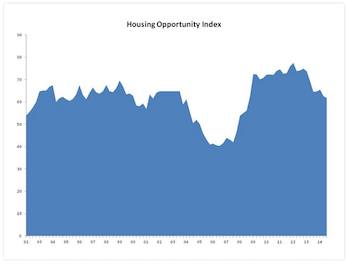 The national median home price increased from $214,000 in the second quarter to $221,000 in the third quarter, while average mortgage interest rates decreased from 4.44 percent to 4.35% in the same period.

Youngstown-Warren-Boardman, Ohio-Pa. claimed the title of the nation’s most affordable major housing market, as 89.1% of all new and existing homes sold in this year’s third quarter were affordable to families earning the area’s median income of $52,700.

Cumberland, Md.-W.Va. and Kokomo, Ind. each tied as the most affordable smaller market, with 94.8% of homes sold in the third quarter being affordable to those earning the median income of $54,100 in Cumberland and $56,900 in Kokomo.

There, just 11.4% of homes sold in the third quarter were affordable to families earning the area’s median income of $100,400. All five least affordable small housing markets were in California.

At the very bottom was Napa, where 10.2% of all new and existing homes sold were affordable to families earning the area’s median income of $70,300.

Servicers’ forbearance portfolio volume declined at a reduced pace this week, as mortgage holders exit COVID-19 plans at the beginning of the month, according to the MBA.