Foreclosure filings, including default notices, scheduled auctions and bank repossessions, increased 15% from last month but are still down 8% from a year ago levels, RealtyTrac’s OctoberForeclosure Market Report said.

This is the largest month-over-month increase since U.S. foreclosure activity peaked in March 2010.

In October, a total of 59,869 properties were scheduled for foreclosure auction during the month, up 24% from the previous month and up 7% from a year ago to the highest level since May 2013.

Scheduled foreclosure auctions in judicial foreclosure states, where foreclosures are processed through the court system, increased 21% from the previous month and were up 3% from a year ago and.

Meanwhile, scheduled foreclosure auctions in non-judicial states increased 27% from the previous month and were up 14% from 2013.

But this news is not a significant surprise, Daren Blomquist, vice president at RealtyTrac, said.

“Over the past three years there has been an average 8% monthly uptick in scheduled foreclosure auctions in October as banks try to get ahead of the usual holiday foreclosure moratoriums,” said Daren Blomquist, vice president at RealtyTrac.

However, Blomquist added that the sheer magnitude of the increase this year demonstrates there is more than just a seasonal pattern at work.

“Distressed properties that have been in a holding pattern for years are finally being cleared for landing at the foreclosure auction,” he said. 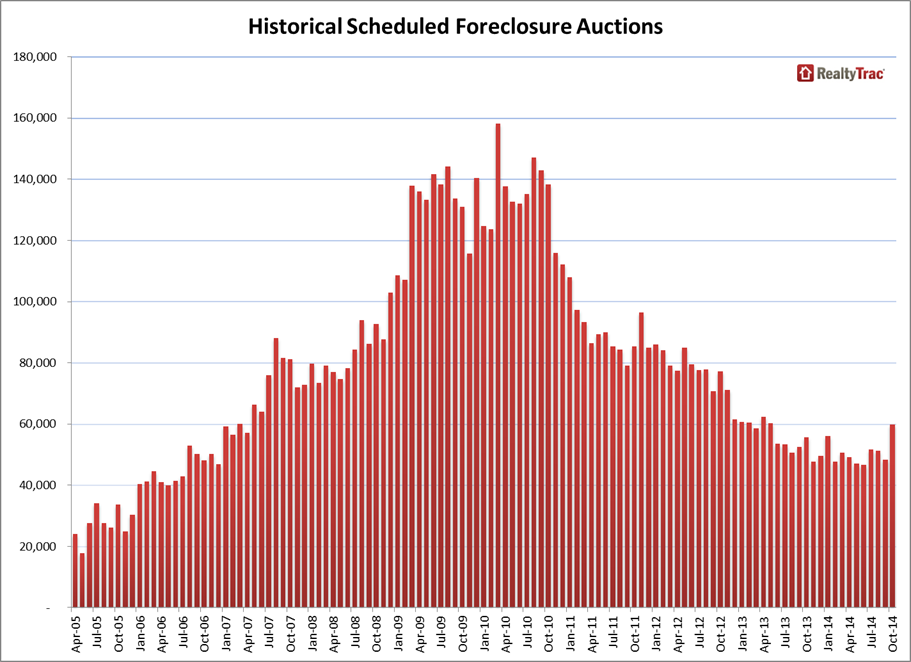