The wife of the alleged killer of Arkansas Realtor Beverly Carter has been charged with capital murder along with Arron Michael Lewis, according to local reports.

Crystal Hope Lowery, 41, of Jacksonville, Ark., was arrested by Arkansas authorities in connection with Carter’s death. Police have yet to reveal to what extent Lowery may be connected to the crime.

A police spokesman did say that Lowery's charge is an indication of equal involvement.

Lewis was arrested shortly after Carter’s body was found at the end of September. Carter's husband grew suspicious when Beverly went to show a home and didn't return within a few hours.

Lewis was later charged with kidnapping and capital murder. Lewis entered a plea of not guilty to murder but he all but confessed to the kidnapping in media and police interviews.

Lewis told reporters she was chosen because "she was a woman that worked alone — a rich broker." 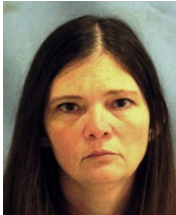 Lewis denied killing Beverly Carter, and mentioned a co-defendant named "Trevor" when reporters spoke to him as he was being led away in handcuffs. Police have no other suspects.

“We've had suspicions all along," Lt. Carl Minden with the Pulaski County Sheriff’s Office told local media. "This is something that through the investigative process they were able to wrap up today."

According to court documents, Lowery, a nursing student at the University of Arkansas at Little Rock, is the estranged wife of the 33-year-old Lewis.

She apparently filed for divorce on Oct. 17 on the ground of general indignities and has been separated from him since August 27.

On September 29, Lowery was apparently cited and released on a misdemeanor warrant for theft by receiving, according to police records.

Lewis told a reporter late last month that he did not kill Carter and that “anything that did occur was an accident."