Home-price growth continues to slow, according to the latest S&P/Case-Shiller Home Price Indices for August 2014.

On a monthly basis, the National Index and Composite Indices showed a slight increase of 0.2% for the month of August.

Detroit, of all places, led the cities with the gain of 0.8%, followed by Dallas, Denver and Las Vegas at 0.5%. Gains in those cities were offset by a decline of 0.4% in San Francisco followed by declines of 0.1% in Charlotte and San Diego.

“After several months in a row of slowing home value growth, it’s fair to say now the market has officially turned a corner and entered a new phase of the recovery. We’re transitioning away from a period of hot and bothered market activity, characterized by low inventory and rapid price growth, onto a more slow and steady trajectory, which is great news,” said Zillow Chief Economist Dr. Stan Humphries. “In housing, boring is better. As appreciation cools and more inventory comes on line, buyers will start to gain a more competitive advantage, after years of sellers being in the driver’s seat. More sedate home value growth, coupled with interest rates that remain incredibly low, will also help housing stay affordable, which is critical to drawing in the next generation of younger, first-time buyers that had been sitting on the sidelines.” 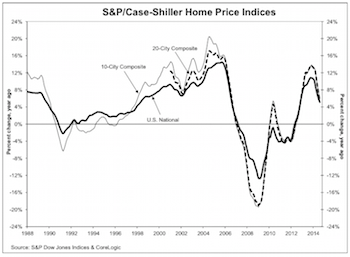 The chart above depicts the annual returns of the U.S. National, the 10-City Composite and the 20- City Composite Home Price Indices.

“Homeowners may be disappointed to see home prices slow their monthly gains, but the sky is not falling,” said Quicken Loans vice president Bill Banfield. “Nationally, home prices are still making healthy yearly gains to grow household equity and throw a lifeline to those that may still be underwater.” 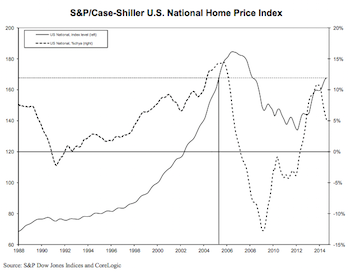 “The large extent of slower increases is seen in the annual figures with all 20 cities; the two composites and the national index all revealing lower numbers than last month. The 10- and 20-City Composites gained 5.5% and 5.6% annually with prices nationally rising at a slower pace of 5.1%. Las Vegas continues to see a sharp deceleration in their annual home prices with a 10.1% annual return, down just below three percent from last month. Miami is now leading the cities with a 10.5% year-over-year return. San Francisco, which has shown double-digit annual gains since November 2012, posted an annual return of 9.0% in August.

All cities except Cleveland saw their annual gains decelerate. Las Vegas showed the most weakness in its year-over-year return; it went from 12.8% in July to 10.1% in August. As a result, Las Vegas lost its leadership position as it moved to second place behind Miami with a 10.5% year-over-year gain. San Francisco posted 9.0% in August, down from its double-digit return of 10.5% in July.

All cities except Boston and Detroit posted lower monthly returns in August compared their returns reported for July. San Francisco showed its largest decline since February 2012; it was the only city that showed a negative monthly return two months in a row from -0.3% in July to -0.4% in August.