Market Condition Indicators designed by CoreLogic (CLGX) identified only four of the top 50 markets in the U.S. as currently overvalued, based on data through August 2014.

CoreLogic also found that despite national home price appreciation gains of 11% in 2013 and 6.5% this year, most markets are still recovering from the crisis.

Earlier this year, CoreLogic released Market Condition Indicators, which evaluate whether individual markets are undervalued, at value or overvalued based on a number of economic variables.

The analysis expects most markets to continue to lag their long-term sustainable level through 2016. 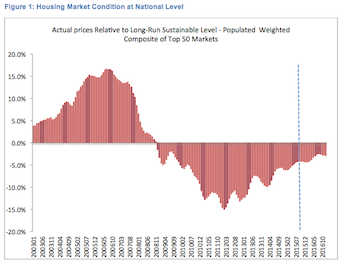 This first graphic looks at home prices nationwide and shows the population-weighted average of the gaps between home prices and their long-run sustainable level in the largest 50 markets.

CoreLogic notes that during the bubble years from 2005 to 2007, prices were more than 10% above the long-run sustainable levels.

Home prices quickly fell more than 10% below the sustainable price during January 2011 and April 2013.

Subsequently, as home prices have continued to rise, the gap has narrowed to 6% below the long-run sustainable level in August 2014. CoreLogic forecasts the gap to shrink further to 3% by the end of 2016.

This shows the four overvalued markets of the top 50 in CoreLogic’s list.

Topping the list are two metro areas in Texas—Austin and Houston—where an oil and gas boom has fueled job growth and population growth, pushing home prices well above their sustainable levels.