The new Case-Shiller house price index is a substantial improvement on its predecessors because it offers a monthly read, and that monthly read shows that housing prices have actually been dropping, rather than just slowing in gains, according to Capital Economics.

The revised look at housing through the new index shows that while the housing bust wasn’t as deep as previously thought, the recovery hasn’t been as strong either.

“(I)f anything, the new index strengthens our view that housing is approaching fair value and that house-price inflation will continue to slow,” said Paul Diggle, property economist at Capital Economics.

Other providers of housing data increasingly challenged the stature of the older Case-Shiller as the gold standard of house-price indices. The Federal Reserve actually uses the CoreLogic index because it was more timely.

“We previously had a choice of one or the other: a national series released quarterly or a monthly series covering 20 major cities. The new index is clearly a welcome improvement,” Diggle said. “But does it change our understanding of the state of the housing market? 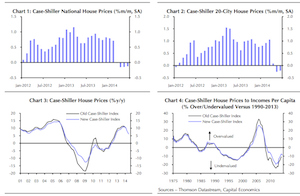 According to the new measure, house prices fell by a cumulative 0.4% over April, May and June.

That was a dramatic reversal from the uninterrupted gains of the previous two years. But it’s more or less the same message as the 0.5% fall on the 20-City measure since April.

“Admittedly, thanks to the changed treatment of foreclosure sales, the historical picture looks different,” he said. “The new index suggests that prices ‘only’ fell by 26% during the crash, relative to 34% on the previous quarterly index. And at 20%, relative to 23%, the subsequent rebound has been a little weaker. For comparison, the same figures for the CoreLogic index are 32% and 26%.”

Either way, what’s relevant for the outlook from here is the valuation picture.

The new series suggests that housing was 8.8% undervalued relative to incomes per capita in the second quarter.

"That’s slightly less than the 10.8% shown on the previous quarterly index, meaning that at the margins the new series adds to our view that housing is approaching fair value. That’s one reason why we expect the slowdown in house price inflation to be sustained," Diggle said.