Home price rose a mere 1% month-over-month in August, according to the latest reports from Trulia (TRLA).

Nationally, the month-over-month increase in asking home prices rose to 1.0% in August, up a bit from 0.7% in July.

According to Trulia’s Price Monitor and Rent Monitor, the South is rising again. 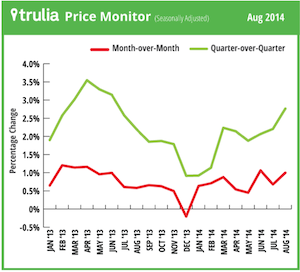 Seven of the 10 U.S. metros with the largest year-over-year price increases are in the South, including the top four: Miami, Florida; Birmingham, Alabama; Lakeland-Winter Haven, Florida and West Palm Beach, Florida.

In the accelerating markets of Birmingham, West Palm Beach, and Palm Bay-Melbourne-Tiitusville, Florida, the year-over-year price gain in August 2013 was less than 5% and is now more than 13%.

But in Riverside-San Bernardino, California; Atlanta, and Oakland, California price gains have slowed significantly from more than 20% year-over-year in August 2013 to less than 14% now. 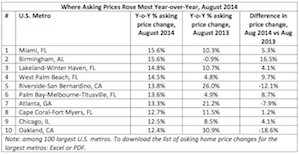 “The housing markets with the slowest price increases (and, in four metros, decreases) are clustered in the Northeast, such as in upstate New York,” said Jed Kolko, chief economist for Trulia. “Why is that? These markets had a mild housing bubble and bust last decade and therefore are now having only a slight price recovery; they’ve also had relatively weak job growth recently.”

Kolko reports that foreclosures have shaped where and when home prices have recovered. Foreclosed homes tend to depress neighboring home values and sell at a discount.

“But once most of the foreclosures in a market are sold, then overall inventory tightens – especially at the low end – giving home prices a boost. In states with a non-judicial foreclosure process, such as California, Michigan, and Texas, foreclosures don’t have to go through the courts,” Kolko said.

That means homes in non-judicial states are foreclosed and sold more quickly than in states with a “judicial” process (such as Florida, Illinois, and New York). As a result, the foreclosure wave cleared sooner and faster in non-judicial states, and housing markets in those states got an earlier and sharper price boost. 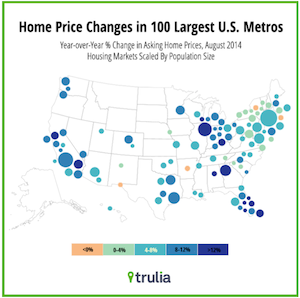