At the national level, U.S. home prices in June were up 0.8% from May, and 5.5% from this time last year, according to the data and analytics division of Black Knight Financial Services.

The yearly increases in home appreciation continue to slow – the last three monthsY/Y increases were May: 5.9%, April: 6.4% & March: 7.0%.
Once again, every one of the 20 largest states and 40 largest metros showed positive month-over-month movement.

Nevada saw the largest monthly gain among states (up 1.4% and followed by Michigan at 1.3%), while Colorado and Texas continued to hit new highs.
Speaking of Nevada: Reno home prices rose 1.9%, the most of any metropolitan area – at the same time, Las Vegas is still 42% off its May 2006 peak. 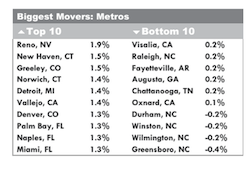 Two of the 40 largest metros, Baltimore & Honolulu, saw negative year over year movement in June, down 0.5% and 5.1%, respectively.

Of the largest metros, San Jose, CA has experienced the greatest gain so far in 2014, rising nearly 10% since the start of the year (its HPI value also hit a new high of $754K this month).