The next big question – skirted by Yellen – is when the Fed should raise rates. She gave little indication of whether it will be sooner or later.

“With the economy getting closer to our objectives, the FOMC’s emphasis is naturally shifting to questions about the degree of remaining slack, how quickly that slack is to be taken up, and thereby to the question of under what conditions we should begin dialing back our extraordinary accommodation,” Yellen said at the Federal Reserve’s summer policy conference in Jackson Hole.

There is no “simple recipe” for rate hikes, and they will be dependent on the health of the rather tepidly recovering labor market or if inflation kicks in too rapidly.

Admitting as much about the squishiness of the jobs recovery, Yellen said 19 separate labor market indicators show the decline in the official U-3 unemployment rate doesn’t reflect how weak labor-market conditions really are.

“Over the past year, the unemployment rate has fallen considerably, and at a surprisingly rapid pace. These developments are encouraging, but it speaks to the depth of the damage that, five years after the end of the recession, the labor market has yet to fully recover,” Yellen said. 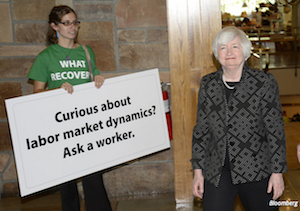 She said the Federal Reserve's monetary policy objective is to foster maximum employment and price stability. In this regard, a key challenge is to assess just how far the economy now stands from the attainment of its maximum employment goal.

“Earlier this year, however, with the unemployment rate declining faster than had been anticipated and nearing the 6-1/2 percent threshold, the FOMC recast its forward guidance, stating that ‘in determining how long to maintain the current 0 to 1/4 percent target range for the federal funds rate, the Committee would assess progress–both realized and expected–toward its objectives of maximum employment and 2 percent inflation,’” she said. “As the recovery progresses, assessments of the degree of remaining slack in the labor market need to become more nuanced because of considerable uncertainty about the level of employment consistent with the Federal Reserve's dual mandate.”

Yellen said the assessment of labor market slack is rarely simple and has been especially challenging recently. Estimates of slack necessitate difficult judgments about the magnitudes of the cyclical and structural influences affecting labor market variables, including labor force participation, the extent of part-time employment for economic reasons, and labor market flows, such as the pace of hires and quits.

Labor force participation peaked in early 2000, so its decline began well before the Great Recession. A portion of that decline clearly relates to the aging of the baby boom generation, Yellen said. But the pace of decline accelerated with the recession.

“A second factor bearing on estimates of labor market slack is the elevated number of workers who are employed part time but desire full-time work (those classified as ‘part time for economic reasons’),” she said. “At nearly 5 percent of the labor force, the number of such workers is notably larger, relative to the unemployment rate, than has been typical historically, providing another reason why the current level of the unemployment rate may understate the amount of remaining slack in the labor market. 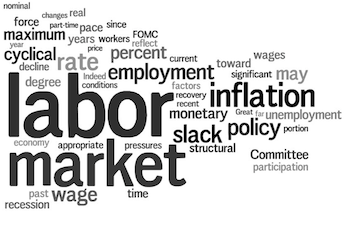 “This broadly based metric supports the conclusion that the labor market has improved significantly over the past year, but it also suggests that the decline in the unemployment rate over this period somewhat overstates the improvement in overall labor market conditions,” she said.

“Finally, changes in labor compensation may also help shed light on the degree of labor market slack, although here, too, there are significant challenges in distinguishing between cyclical and structural influences. Over the past several years, wage inflation, as measured by several different indexes, has averaged about 2%, and there has been little evidence of any broad-based acceleration in either wages or compensation. Indeed, in real terms, wages have been about flat, growing less than labor productivity,” Yellen said. “This pattern of subdued real wage gains suggests that nominal compensation could rise more quickly without exerting any meaningful upward pressure on inflation. And, since wage movements have historically been sensitive to tightness in the labor market, the recent behavior of both nominal and real wages point to weaker labor market conditions than would be indicated by the current unemployment rate.”