Some places it just pays more to rent out your home when you move someplace else rather than simply selling it, because it pays every month.

Zillow (Z) has listed the top 10 markets where it pays the most to become the Ropers.

This is for so-called “mom-and-pop landlords” – homeowners who have turned their personal home into a rental rather than selling it when they move.

These are the best places where the amount an owner can charge a tenant is greater than mortgage costs.

Zillow says that rental property owners in Oklahoma City have the biggest short-term financial gains, with profits — the difference between the monthly rent and mortgage payments — expected around $536 monthly, or $6,431 annually. Miami, Tulsa, Cincinnati and Denver round out the top five metros, all with monthly short-term profits above $300. 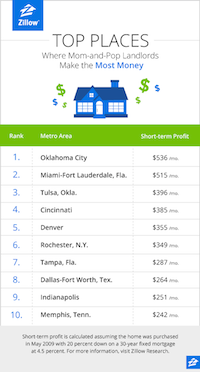 Landlords in the San Jose area have the largest long-term financial gains, with profits expected around $8,927 monthly, or $107,122 annually.

Zillow Chief Economist Stan Humphries says that while mom-and-pop landlords are mainly concerned about the month-to-month profit, homeowners considering renting out their properties instead of selling should also pay attention to long-term profit.

In places like New York and San Francisco, which are rental heavy compared to ownership, rental income doesn't usually exceed the homeowner's mortgage payments. But in the long-term, even in those markets profit can be had, when owners account for home equity growth.