For the 19th consecutive month, distressed home sales fell on a year-over-year basis, declining to 11.4% of home sales in June.

Distressed sales, which include both REO and short sales, accounted for the lowest share since December 2007 and a strong improvement from the same time a year ago when this category made up 15.8% of total sales.

At its peak, the distressed sales share totaled 32.5% of all sales in January 2009, with REO sales making up 28% of that share.

“The more recent shift away from REO sales is a driver of improving home prices, as REOs typically sell at a larger discount compared to healthy sales than do short sales,” CoreLogic (CLGX) reports. “There will always be some amount of distress in the housing market, so one would never expect a zero percent distressed sales share, but the pre-crisis share of distressed sales was traditionally about 2%.” 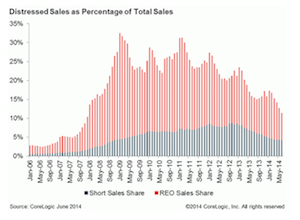 Of the largest 25 Core Based Statistical Areas (CBSAs) based on population, Chicago-Naperville-Arlington Heights, Ill. had the largest share of distressed sales at 27.4%, followed by Miami-Miami Beach-Kendall, Fla. (26.4%), Orlando-Kissimmee-Sanford, Fla. (24.8%), Tampa-St. Petersburg-Clearwater, Fla. (24.6%) and Las Vegas-Henderson-Paradise, Nev. (23.9%).