This represents a 15.7% gain in starts and permits, which is the good news that will make headlines, according to the U.S. Census Bureau and the Department of Housing and Urban Development.

The bad news is that almost all of those gains from June to July in starts and permits are in multifamily rental housing.

Housing starts in July likewise gained mostly on multifamily strength. Single-family units rose to 656,000, while multifamily unit starts soared by 33% in one month, from 318,000 to 423,000. 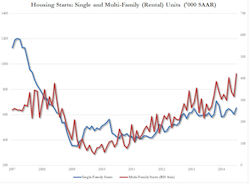 Notably, this has multifamily starts coming in at its highest level since January 2006.

“There were 585,000 total housing starts during the first seven months of 2014 (not seasonally adjusted, NSA), up 9.1% from the 563 thousand during the same period of 2013,” notes Bill McBride at Calculated Risk. “Single family starts are up 3%, and multi-family starts up 24%.  The key weakness has been in single family starts.”

Housing is improving but it is becoming apparent that the market has changed. Single-family housing is not as attractive financially as in the past and multifamily housing is the current trend. But at least it is on an uptrend.

Nevertheless, homebuilder stocks were up on the news Tuesday.