Bank of America Merrill Lynch believes that Tuesday’s report from CoreLogic (CLGX) on the general slowdown in home price gains is more the pendulum swinging back from outsized gains than a general weakness. 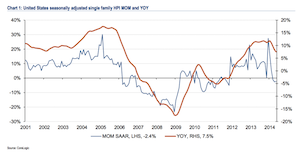 “We think part of the recent decline in home prices is simply a reversal from the outsized gains realized in the first quarter of the year, and not a start of a prolonged period of price declines,” BofAML analysts say. “These recent prints are consistent with our call for home price appreciation to slow this year and we are still looking for full- year 2014 returns to come in at 5.2% [comparing fourth quarters.]”

Since hitting a post-crisis peak in March 2014, the seasonally adjusted HPI has retreated by 0.52%. The past three months are the first negative MoM returns since December 2011.

Home prices increased MoM in 12 of the 20 MSAs tracked in our report on a SAAR basis. New York showed the largest decline of 5.9% relative to a gain of 24.24% posted in May.

The share of mortgage loans in forbearance fell for the fourth week in a row to 8.18% according to the Mortgage Bankers Association’s Forbearance and Call Volume survey. The MBA approximates 4.2 million homeowners are now in forbearance.