Home prices nationwide, including distressed sales, increased 7.5% in June 2014 compared to June 2013, reflecting a general slowdown that continues and will worsen through June 2015.

"Home price appreciation continued moderating in June with its slight month-over-month increase," said Mark Fleming, chief economist for CoreLogic. "This reversion to normality that we are finally experiencing is expected to continue across the country and should further alleviate concern over diminishing affordability and the risk of another asset bubble."

The good news is this change represents 28 months of consecutive year-over-year increases in home prices nationally. On a month-over-month basis, home prices nationwide, including distressed sales, increased 1% in June 2014 compared to May 2014.

"Home prices are continuing to rise fueled by ongoing tight supply, low rates and aggressive investor buying on the East and West Coasts," said Anand Nallathambi, president and CEO of CoreLogic. "The expected surge in the number of homes for sale has not materialized to date as many homeowners are staying put and waiting for better economic times and higher prices in the future." 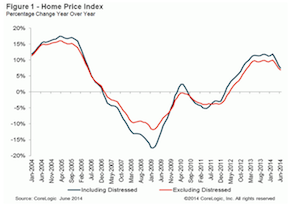 At the state level, including distressed sales, only Arkansas posted a decline in June 2014 with 0.4-percent depreciation. A total of 12 states, plus the District of Columbia, reached new highs in the Home Price Index dating back to January 1976 when the index started. These states are Alaska, Colorado, District of Columbia, Iowa, Louisiana, Nebraska, North Dakota, Oklahoma, South Dakota, Tennessee, Texas, Vermont and Wyoming. 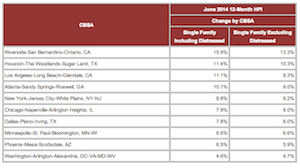 The CoreLogic HPI Forecast is a monthly projection of home prices built using the CoreLogic HPI and other economic variables. Values are derived from state-level forecasts by weighting indices according to the number of owner-occupied households for each state.

Including distressed sales, the U.S. has experienced 28 consecutive months of year-over-year increases; however, the national average is no longer posting double-digit increases.

Ninety-eight of the top 100 Core Based Statistical Areas (CBSAs) measured by population showed year-over-year increases in June 2014. The two CBSAs that did not show an increase were Worcester, Mass.-Conn. and Little Rock-North Little Rock-Conway, Ark.