While home-price increases have slowed, they are still trending higher, and have seen 26 months of consecutive year-over-year increases nationally. This puts U.S. home prices at just 12% off their 2006 peak.

At the same time, wages and household income have been stagnant. 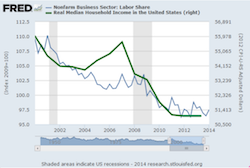 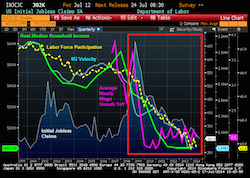 "Average wages per worker rose less than 1% in 2013 in all but one of the 10 metros with the largest price increases," says Jed Kolko, chief economist at Trulia (TRLA). "Nationally, asking prices (year over year in June 2014) rose faster than wages per worker (year-over-year in 2013) in 95 of the 100 largest metros."

Aside from two inland California housing markets — Riverside-San Bernardino and Bakersfield — the top 10 metros with the biggest year-over-year price gains are in the South and Midwest.

These markets with the largest year-over-year price gains are generally more affordable, but prices in these markets are rising much faster than wages, according to recently released full-year 2013 wage data from the Bureau of Labor Statistics’ Quarterly Census of Employment and Wages (QCEW). 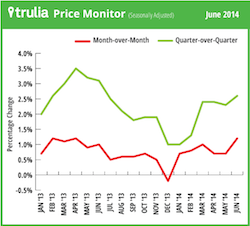 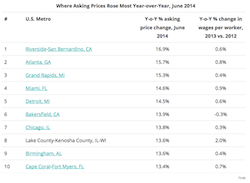 “The price slowdown has been particularly sharp in the boom-and-bust markets of California and the Southwest, where the recession was severe, the recovery was dramatic, and the slowdown is now most pronounced,” Kolko says.

In Phoenix, Las Vegas, Sacramento, and Orange County, price gains have skidded to a stop or gone into reverse in the past quarter after posting gains of more than 20% year over year in June 2013.

Kolko said that although these four housing markets all still have average or above-average year-over-year price increases in June 2014, their slowdowns or reversals in the most recent quarter foreshadow a continued deceleration in year-over-year gains.