This comes a month after a major disappointment in May, when starts fell a monthly 6.5% and permits dropped 6.4%, well below consensus.

Notably, this comes one day after the release from the National Association of Home Builders housing confidence index, which says that “homebuilder confidence” is at a six-month high.

“The drop in June’s housing starts is disappointing but largely regionalized,” said Quicken Loans Vice President Bill Banfield.  “With single-family home builder confidence up and permits up year-over-year, we will see if this translates into improvements in the coming months.”

June starts came in at 0.893 million units annualized. Expectations were for 1.026 million units. The single-family component declined 9% in June, following a 2.6% dip the prior month.

Privately-owned housing units authorized by building permits in June were at a seasonally adjusted annual rate of 963,000. This is 4.2% below the revised May rate of 1,005,000.

“While sales activity has picked up in recent months after a lackluster first quarter, homebuilders remain cautious amid a still uneven recovery,” said Sterne Agee chief economist Lindsey Piegza. “As Chairman (Janet) Yellen noted in her testimony earlier this week, the housing market activity ‘has shown little recent progress’ as potential buyers are discouraged by higher mortgage rates and rising prices. As rising home prices continue to outpace income growth, many potential homebuyers are being squeezed out of the market, limiting new demand.”

This miss on both starts and permits is huge. Analysts expected that housing starts would come in at an annualized rate of 1.02 million. However, May's numbers were revised down to 985,000 from 1.001 million to 893,000, the biggest miss since January 2007. 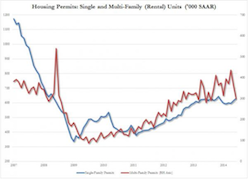 Privately-owned housing completions in June were at a seasonally adjusted annual rate of 789,000. This is 12% below the revised May estimate of 897,000.

Driven by affordability and an affinity for overlooked markets, some real estate investors are looking to out-of-state properties.