Perhaps the reason buyers are staying away from the housing market is because they simply can’t afford it.

At least, that’s what one report suggests. In Trulia’s Price Monitor for June, Trulia’s chief economist Jed Kolko compares the rise in asking prices with the rise (or lack thereof) of wages in the 100 largest metro areas.

The results are a bit troubling for those who think they should be earning more money.

According to Trulia’s data, in the ten markets where asking prices have risen the most year-over-year, wages have barely increased. In Riverside-San Bernardino, California, asking prices rose 16.9% from June 2013 to June 2014. Wages in that area only rose by 0.6% from 2012-2013, according to recently released full-year 2013 wage data from the Bureau of Labor Statistics’ Quarterly Census of Employment and Wages.

Click on the image below to see the top ten markets where asking prices have grown and each market’s change in wages as well. 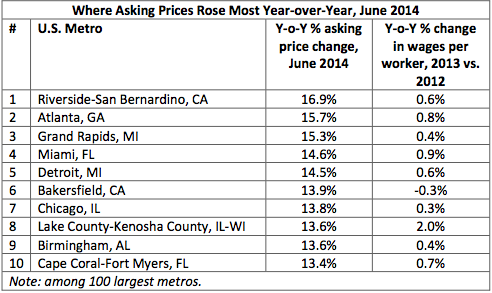 But according to Trulia’s data, price increases continue to be widespread, with 97 out of the top 100 metro areas posting year-over-year gains. That’s the most since the recovery began.

Click the image below for a look at Trulia’s Price Monitor, which tracks the changes in asking prices. 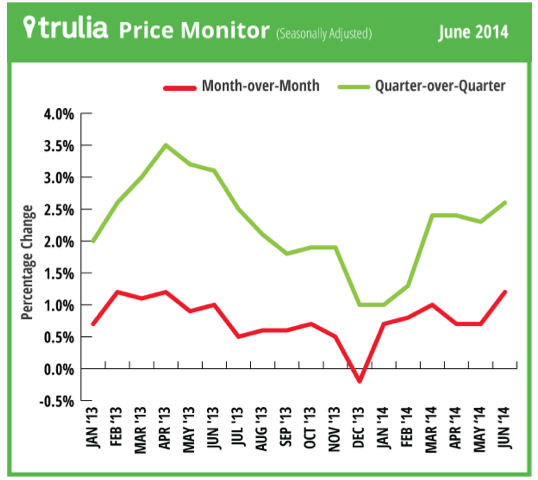 In four of the biggest boom-and-bust markets of California and the Southwest, price gains have all but ceased.

“In Phoenix, Las Vegas, Sacramento and Orange County, price gains have skidded to a stop or gone into reverse in the past quarter after posting gains of more than 20% year-over-year in June 2013,” Kolko said. “Although these four markets all still have average or above-average year-over-year price increases in June 2014, their slowdowns or reversals in the most recent quarter foreshadow a continued deceleration in year-over-year gains.”