Mortgage credit availability increased in June according to the Mortgage Credit Availability Index, a report from the Mortgage Bankers Association, which analyzes data from the AllRegs Market Clarity product.

Mortgage credit loosened somewhat in June as a result of a slight net loosening in lender criteria regarding Federal Housing Administration and Department of Veterans Affairs loans with respect to minimum credit scores and maximum loan-to-value ratios. 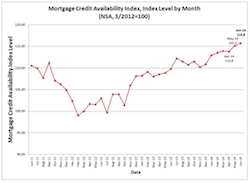 Despite credit being more available, mortgage originations are at their lowest level in 14 years and everyone is expecting that will only get worse as mortgage rates creep up. 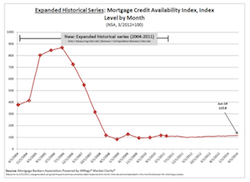 A decline in the MCAI indicates that lending standards are tightening, while increases in the index are indicative of a loosening of credit.