Foreclosure starts unexpectedly reversed course and climbed 9.5% in May, according to Black Knight Financial Services, countering an eight-month streak of declines.

The survey found that more than half of these foreclosure starts were repeats, rather than new foreclosures, and almost 80% were on loans from 2008 or earlier.

“While foreclosure starts did rise over 9% in May, it’s important to remember the historical trend is still one of improvement,” said Kostya Gradushy, Black Knight’s manager of Loan Data and Customer Analytics. “On a year-over-year basis, January through May foreclosure starts were still down 32%, and we are still looking at the lowest level of foreclosure starts in seven years.

“Additionally, over half of these starts are repeat foreclosures, rather than new entries into the pipeline, That is, these are loans that had been in foreclosure, shifted back to either current or delinquent status by way of modification, repayment plan or some action by the borrower, but have now fallen into foreclosure once again,” Gradushy said. 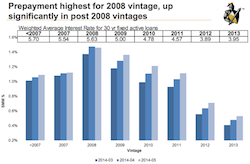 The survey also found that monthly prepayment speeds — historically a good indicator of refinance activity — rose again in May, the third consecutive month 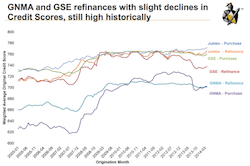 Though refinance activity is still down significantly from 2012 and early last year, it has increased 21% since January.

While negative equity continues to decline at the national level (down to 8.9% of total active mortgages), nearly 80% of loans that either seriously delinquent or in foreclosure are underwater.

“Given that mortgage interest rates were at their lowest point in seven months, Black Knight also saw monthly prepament speeds — historically a good indicator of refinance activity — rise again for the third consecutive month. Looking at this situation at a more granular level, we found that although prepayment rates actually declined on 2008 vintage loans, that year’s mortgages still represent the highest total rate of prepayments,” Gradushy said. “For 2009 through 2013 vintages, prepayments were up across the board over the past few months.” ? 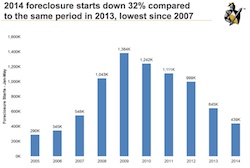 Black Knight also found that seasonal purchase activity has picked up, with approximately 897,000 purchase originations through April, a level on par with 2013 (898,000 over the same period), and better than 2012 (847,000). Overall, credit standards do not seem to be easing, as both average loan-to-value (LTV) ratios and credit scores on both purchase and refinance originations remain relatively strict and essentially unchanged. 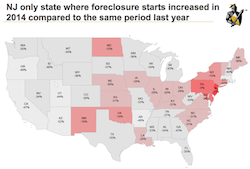 Finally, home price appreciation continues to help drive down the share of borrowers underwater on their mortgages. As of April, the share of loans in negative equity positions had declined to 8.9%. However, the situation is significantly worse for loans either seriously delinquent (90 or more days past due) or in foreclosure. Black Knight found that 78% of this subset of distressed loans had combined loan-to-value ratios of 100% or more.