Clear Capital’s midyear market report card says the industry needs to get used to less than 1% housing growth for the remainder of 2014.

That said, all total 2014 should see year-end housing gains of 3.9%, within the historic norms of 3-5% housing growth, Clear Capital’s analyst said. They note that from 1982 after the Carter recession, through 2013, home prices grew an average 3.2%.

"Our midyear forecast continues to support the initial 2014 projection for national price growth we made back in December 2013, with overall home prices expected to end the year up 3.9%,” said Alex Villacorta, vice president of research and analytics at Clear Capital. “While it might feel like a shock to market participants and observers who have grown used to double digit price growth, the market’s continued move back toward long-run historical levels and growth rates is something we have expected. What we will be watching for, however, is whether the market settles into this historical sweet spot or whether prices continue to underperform historical norms.

The report also reports on the troubling trend HousingWire has been covering.

“The low price tier, one of the key drivers of the recovery, has put on the brakes. Through the end of 2014, national annual rates of growth will be more than cut in half from the current 12.4% to just 5.6%. By Q4, quarterly growth across all three price tiers is set to fall below 1%, with the low tier forecast showing the weakest quarterly growth of all,” the report states. 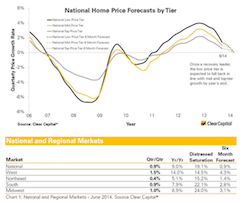 In other areas of concern for housing, national levels of distressed saturation fell below 20% for the first time since February 2008. This is certainly a good move for the long-term health and stability of the market, though discounted distressed opportunities particularly among investors helped to jump-start the recovery.

“Improvements in distressed market measures mean other economic measures, like consumer confidence and the job market, must continue to improve to support the recovery,” the report states.

Though metro market trends reflect moderating patterns seen at the national level, June data and forecasts through the end of 2014 reveal notable variations that suggest opportunity and risk will persist through moderation, the report states.

Atlanta and San Jose should each continue a relatively strong recovery, leading the top 50 MSAs with 2.9% growth through the end of 2014. The markets’ drastically different distressed saturation rates, however, signal they have very different demand drivers.

Detroit, on the other hand, is slated to see declines of 4.6% over the next six months, to end the year with total growth just under 2%. Detroit continues to see large variability in price trends in part influenced by low price points, with a median price of $115,000.

“We hope stability will restore consumer confidence and help support this healthy rate of growth in the long-term,” Villacort said. “Yet, any hint of declines in prices over the winter could have a negative effect on the spring buying season in 2015. There is real concern that the markets are not quite strong enough to withstand any further shocks. Uncertainty surrounding drivers like household formations, move-up buyers on lock down with underwater mortgages, and constraints in the job market could limit the market’s ability to sustain any type of growth moving forward.”