A Twitter fight broke out among industry leaders last month on whether African-American borrowers are denied at about 32% (within the historic norm) or as high as 56%, as claimed by the head of the largest mortgage banking trade association.

Turns out that by some measures, it might be actually worse, according to the Urban Institute and their reading of Home Mortgage Disclosure Act data.

The analysts at Urban Institute say that when David Stevens, president and CEO of the Mortgage Bankers Association many, including Fannie Mae, responded that MBA’s numbers overestimated the denial rate for minorities, neither were right.

“But our numbers show that even the MBA’s denial rate underestimated the tightness of the GSE market,” Wei Li said. “Preserving the status quo of GSEs is not enough to provide needed credit to borrowers with weaker credit profiles, including many minority applicants.”

The MBA wants to reduce government involvement in the mortgage market and replace it with more private capital, which of course would come from MBA members, among others. Supporters of the GSEs say that they worry that dismantling the GSEs could restrict minorities’ access to credit.

After the Twitter fight, some said MBA was using data that resulted in a higher denial rate, as a way to show where the GSEs were already failing minority buyers.

From HMDA, it is possible to calculate the denial rate for all mortgage applicants, Wei points out.

According to HMDA, at least 16% were denied GSE loans for purchase of an owner-occupied property in 2012.

“But by matching HMDA’s data with CoreLogic’s, we found that the denial rate for low credit profile applicants of government-sponsored enterprise (Fannie and Freddie Mac) loans was at least 54%,” Wei says.

By race and ethnicity, in 2012, at least 40% of all African American applicants, 27% of Hispanic, 14% of white and 15% of Asian applicants were denied GSE loans

But when they narrowed down to applicants of GSE loans with weaker credit profiles, these denial rates jump to at least 56%, 49%, 42% and 35%.

“The ultimate point of Stevens' remarks was to assert that GSE reform is needed in part because minority borrowers are not currently being well served by the GSEs,” Wei said. “Our numbers show that the GSE market is excluding the majority of borrowers with weaker credit profiles, including but not limited to African Americans.”

“While all borrowers lost household equity in the Great Recession and are now feeling the crunch of tightening credit, minority borrowers may feel it most. Many of these minority borrowers received the kind of predatory mortgages now forbidden under the Dodd-Frank Act,” said Urban Institute’s Laurie Goodman. “With the subsequent downturn in prices, particularly in minority neighborhoods, higher minority default rates are not surprising. Now, strict credit standards and lowered FICO scores due to missed payments or foreclosure prevent many of these same borrowers from entering the housing market despite lower prices.”

Questions about how HMDA data is gathered and read continue to raise concerns in the industry.

Mortgage TrueView President and CEO David Moffat said that his company’s 2013 HMDAsurvey showed that many lenders are submitting their data with formatting errors, which could lead to non-compliance issues with regulators.

Among his firm’s key findings:

“Regulators have made it clear that lenders face significant fines and penalties for non-compliance with HMDA reporting requirements,” Moffat said. “Our survey shows that problems with the way the data is reported could raise that risk. We strongly recommend that lenders’ senior management get more involved in monitoring and managing HMDA reporting, as well as other regulatory reporting requirements.”

Moffat provide HousingWire the following chart that cleared up some of the Rosner/Stevens confusion. 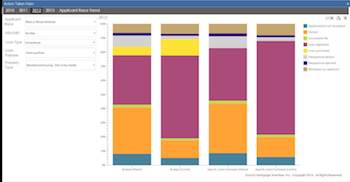 “I think the following says it all.  Specifically, The third column summarizes the actions taken with regards to 2012 applications by black applications excluding Loans Purchased.  This column shows that the origination rate for the indicated loan type, loan purpose, and property type is approximately 40%,” Moffat said.

“This amount, or the inverse amount, is what Mr. Stevens was apparently referring to when he indicated approximately 56% of black applicant loan applications were denied," he said. "Mr. Rosner’s position is based on the denial rate presented in the same third column – which totals approximately 35% (43% when denied and preapprovals denied are added together).”

The fourth column presents the comparatives using white applicants as a control group.  These results are 44% compared to Steven’s 59% and 18% compared to Rosner’s 35% .

Over the next five weeks, Todd Duncan, sales entrepreneur and New York Times best-selling author, will showcase five principles for mortgage and real estate professionals to embrace in order to crush it in business and life.