Two more employees at the Consumer Financial Protection Bureau came forward Wednesday to tell of their experiences with alleged financial mismanagement, operational incompetence, discrimination and retaliation in what was the third in a series of hearings on discrimination at the CFPB.

The two CFPB employees – current bank examiner in the enforcement and fair lending division Ali Naraghi, and former quality monitor in the office of consumer response, Kevin Williams – were subpoenaed to testify.

The two testified before Congress about a “culture of intimidation and retaliation” at the agency and raised allegations of mistreatment in the workplace.

Naraghi also testified about deficiencies in the bank examination process at CFPB, and a systemic drive to find violations where none exist.

Williams likewise testified to the mismanagement and inexperience of leaders he dealt with.

Naraghi is an enthusiastic and idealistic public servant who said he answered the call of Elizabeth Warren’s vision for what the CFPB could be.

“I believe that the root cause of the problems I have encountered at the bureau is management’s lack of accountability. The only consistent thing about CFPB management is its inconsistency,” he said. “I am the naturalized U.S. citizen that bureau management referred to as an ‘f***ing foreigner.’

“I take great pride in serving my country for 14 years with distinction at the Federal Reserve Board of Governors prior to joining the bureau at its inception and am proud of my Persian heritage,” Naraghi said. “I hope, by telling my story, it will further enlighten the committee about the culture of intimidation and retaliation at the bureau and how that culture makes it very difficult for employees to raise concerns about mistreatment, mismanagement, and abuse of authority. In short, favoritism and cronyism runs rampant at the bureau.”

Naraghi said that the CFPB has hired inexperienced managers whose only qualification appears to him to be personal or other connections to bureau hiring officials.

He also testified about gross mismanagement that wastes taxpayer funds.

“For example, in the Southeast Region, about 50-75 examiners were kept at their homes, essentially without work to perform for eight months between approximately September 2011 through May of 2012. In my opinion, this was one of many examples of wasting taxpayers’ funds due to supervision management’s incompetence,” he told the subcommittee.

Most ominous for those dealing with the CFPB from the outside, Naraghi testified under oath that the CFPB favors “results-oriented examinations” where CFPB executives decided at the outset to find a violation even if none were identified. 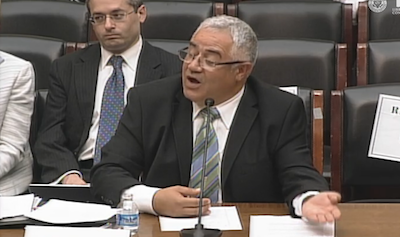 “I worked on an examination for three weeks reviewing 52 mortgage modification applications, and did not find any violation. The field manager told me that I must not have done my job right because I did not identify any violations,” Naraghi said. “Others in my team were told to expand their sample size if no violations are identified in their initial sample. This is contrary to sampling procedures of the FFIEC and prudential regulators. There is no statistically sound rationale in conducting examinations in this manner.”

Williams was part of the group referred to by management at the CFPB as “The Plantation.”

“My experience at the CFPB was reminiscent of past eras of injustice, cronyism, discrimination, and retaliation. The events that transpired at the bureau occurred because basic measures were not in place to properly supervise its untested management,” Williams testified.

“Unfortunately, I was a charter member in the Intake unit, which, indeed, came to be referred to as the ‘Plantation.’ There, I personally witnessed and was the victim of racial discrimination perpetrated by black as well as white managers,” Williams said. “The unit was dubbed the Plantation because when we started, the majority of black employees were assigned to Intake, which was basically data entry. 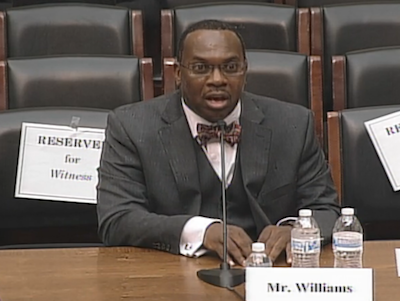 “The Plantation is where black women and white men oversee a unit of black employees who are never considered or groomed for management despite their competitive qualifications,” Williams said. “Bureau management excluded them from the outset as part of a strategy of domination, and completely deprived them of any meaningful opportunity for advancement.”

When asked by Rep. Al Green, R-Texas, if he contacted any organizations to complain about the civil rights violations, Wiliams said yes, he contacted Operation PUSH, Al Shapton's Action Network, and Rep. Maxine Waters, D-California, who is the ranking member of the House Financial Services Committee.

At an April 2 subcommittee hearing, Angela Martin, a current CFPB employee, testified about the discrimination and retaliation she experienced at CFPB.

Raucci also testified that a culture of exclusion, retaliation and collusion is pervasive throughout the division of CFPB in which Martin worked, the Office of Consumer Response.

At a May 21 subcommittee hearing, two CFPB employees testified under subpoena about allegations of discrimination and retaliation at the CFPB.

Liza Strong, lead of employee relations for the CFPB, testified to her experiences processing Martin’s complaint.

Ben Konop, an attorney from CFPB’s enforcement division and the Executive Vice President, National Treasury Employees Union Chapter 335, testified that the union chapter has repeatedly raised concerns with the CFPB about its employee performance review system and pay equity.