Tighter credit standards may be squeezing out the average buyer, but that just means that there are more properties available for investors. And investors are capitalizing on the increasing supply more frequently than they have since 2011.

According to RealtyTrac’s U.S. Institutional Investor & Cash Sales Report for the first quarter, the share of all-cash sales climbed to 42.7% of the total sales in the first three months of 2014.

That’s the highest since RealtyTrac began tracking cash purchases in 2011. It’s also up from 37.8% in the fourth quarter of 2013 and up significantly from 2013’s first quarter, when cash purchases made up only 19.1% of the market.

“Strict lending standards combined with low inventory continue to give the advantage to investors and other cash buyers in this housing market,” said Daren Blomquist, vice president at RealtyTrac. “The good news is that as institutional investors pull back their purchasing in many markets across the country, there is still strong demand from other cash buyers — including individual investors, second-home buyers and even owner-occupant buyers — to fill the vacuum of demand left by institutional investors."

As seen in the graphic below, cash sales have been on the rise since the first quarter of last year, with a massive increase in 2013’s third quarter. 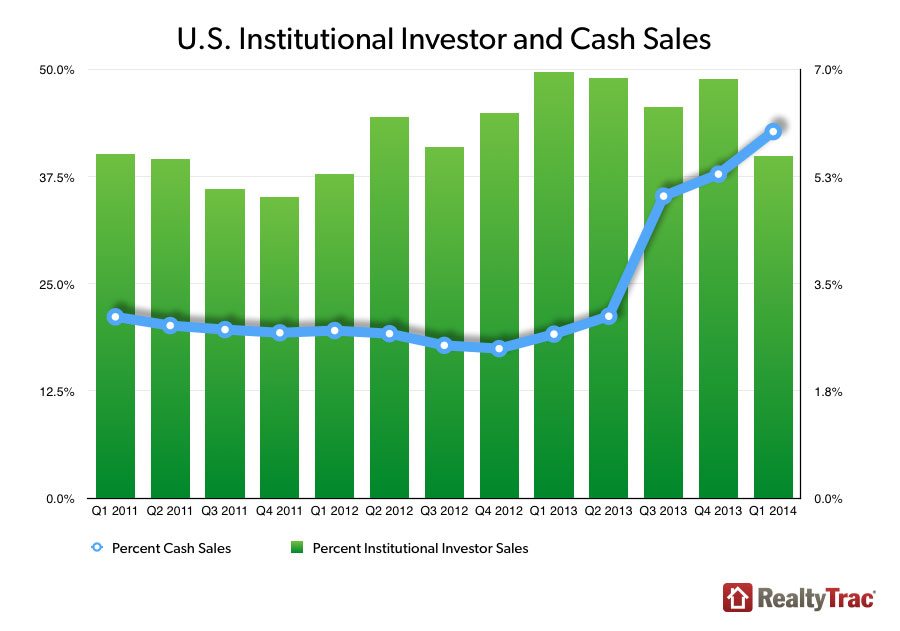 The all-cash buyers seemed to be getting their properties on the cheap as well. The average sales price of an all-cash purchase in the first quarter was $207,668. That’s 13% below the average estimated full market value of the properties that were purchased: $237,900.

“Institutional investors have bought up much of the affordable inventory they are traditionally interested in, which explains the decrease in institutional investor sales,” said Chris Pollinger, senior vice president of sales at First Team Real Estate, covering the Southern California market.

“We are seeing a rise in foreign buyers purchasing high-end homes, which is contributing to the rise in all-cash purchases,” he said. “Inventory shortages as well as lending regulations favor the all-cash buyer, which explains the increase in cash sales on both a national and local level.”