When The Government Accountability Office released the results of its study of the Independent Foreclosure Review, it didn’t look particularly good for the IFR. The GAO found that the process undertaken by the Office of the Comptroller of the Currency and the Federal Reserve to provide foreclosure assistance to distressed borrowers was lacking in oversight and transparency. The GAO's report can be read here.

In 2013, the OCC and Fed signed consent orders with 16 mortgage servicers that required the servicers to provide $3.9 billion in payments to 4.4 million borrowers and $6 billion in foreclosure prevention actions.

The IFR review was met with criticism from Congresswoman Maxine Waters, D-Calif.,Ranking Member of the House Financial Services Committee. Waters said that the OCC and Fed “used a nonsensical crediting system for the largest portion of the settlement,” which was designed to provide foreclosure relief. That isn't the first time that the the IFR has been under fire. Previously, the entire settlement process faced controversy, as critics called the IFR cumbersome and costly.

On Wednesday, the OCC released a status update on how much of that $3.9 billion payback fund has actually been paid out, and how much of the $6 billion in foreclosure prevention actions has been collected by the government.

The Qualified Settlement Fund 1 is managed by the OCC and consists of payments from Aurora, Bank of America, Citibank, HSBC, JPMorgan Chase, MetLife Bank, PNC, Sovereign, SunTrust (regulated by the Federal Reserve Board), U.S. Bank, and Wells Fargo.

The list of total scheduled repayments from the affected servicers can be seen below. 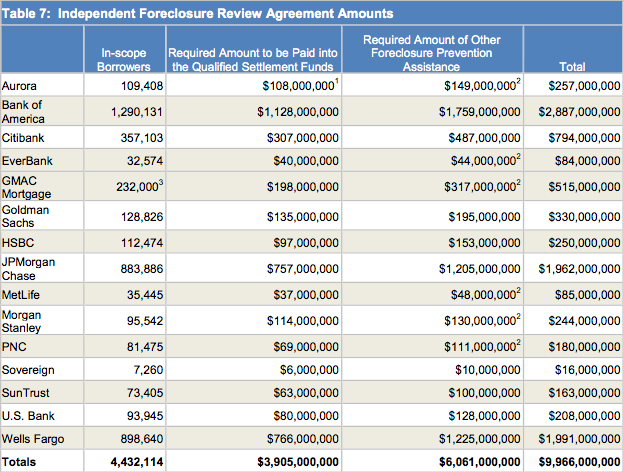 Aurora, EverBank, GMAC Mortgage, MetLife, Morgan Stanley and PNC were originally required to pay $799 million collectively for foreclosure prevention assistance. According to the OCC report, the six servicers met those obligations by paying $92 million collectively to the qualified settlement funds or HUD-approved nonprofit organizations that provide borrower counseling or education.

The OCC also manages Qualified Settlement Fund 4, which is made up of payments from EverBank and will begin payments in the second quarter of 2014.

Read the full report from the OCC here.