Lending, you could say, is the spark plug inside the U.S. economic engine. When in good working order, fed just at the right time and with the optimum mixture of regulation and skin-in-the-game, so to speak, combustion occurs. The economy prospers.

Except this is America 2013. Today, we are presented with a set of circumstances that blows the plug out of working order. Worse, the crankshaft, the very driver of our economic existence, is broken: When people do not repay debt, when they lose affinity with the character trait that compels them to do so, the economy suffers.

That is the state of affairs we are faced with today. And the great enabler behind this mayhem? The law. Or, in the parlance of the engine metaphor, the computer, or arbiter, behind the modern engine. In the arena of the housing economy, the breaker of the crankshaft is the homeowner bill of rights movement.

And here is why this is critically important: There are significant scientific consequences for rewarding borrowers monetarily for defaulting on a home loan. 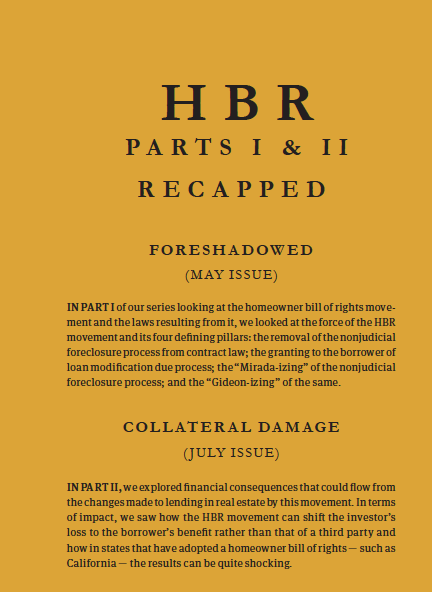 Since this series began in May, two more states — Minnesota and Nevada — have adopted a homeowner bill of rights, or HBR. In addition, the Mortgage Bankers Association has written a position paper that individual states should cease passing HBRs and allow the Consumer Financial Protection Bureau-established national HBR, which will become effective in January 2014, to become the gold standard.

The second article also pointed out that the more onerous an HBR makes the foreclosure process, the greater the reward to the borrower for defaulting. Thus, an HBR provides an opportunity for local politicians to provide the homeowners of their electorate a benefit paid for by the owner of the loans secured by their home.

The consequences resulting from the financial impact of this HBR strain of legal structure are dire. When one jumps off a tall building, there are foreseeable consequences, which the political class cannot change by statute. In exactly the same way, passing an HBR and claiming it will have no consequences is a bit like passing a law encouraging people to jump from buildings, claiming there is no gravity.

In presenting this analysis, a deep debt is owed to Thomas W. Showalter, the chief analytics officer of Digital Risk, for his seminal work on this topic, which he outlined in a wide-ranging August 2009 HousingWire article entitled “Not So Ruthless, After All.”

In his opening line, he summed up the point: “Are consumers rational? If anything, the current financial crisis has shown that borrowers can be expected to be anything but, yet the popular press and key pundits have continued to carry the drumbeat for so-called ‘ruthless defaulters,’ meaning those borrowers that choose to simply walk away from their loans irrespective of any financial hardship.”

Which brings to bear the core societal value we know as “willingness to pay.” In short, it is a crucial character trait for a debt-based society. Showalter gave the industry a remarkable gift. It amounts to the intellectual concept of willingness to pay, a character trait that, when tracked, determines whether or not a borrower will pay back a loan.

He was part of a team of researchers that tested two competing hypotheses, using a research tool developed by First American called the WillCapMatrix. Pulling from a sample of 100,000 loans, the team concluded that behavioral principles strongly influence default and loss mitigation. “An extension of the current findings leads to another conclusion: The borrower who is most likely to survive a loan modification is also the borrower who would most likely successfully service the original mortgage,” wrote Showalter.

Showalter pointed out willingness to pay is a character trait that is subject to the normal rules of psychology, and hence, the rules of positive reinforcement: If you reward it, you get more of it; if you punish it, you get less of it.

Let’s take this idea a stage further to consequences. And my suggestion is this: A society punishes willingness to pay by rewarding borrowers who do default. After all, why should a person who is holding down three jobs to make the house payment continue to make sacrifices if his next-door neighbor does not make his house payment, and not only gets to keep his house, but also gets money in his pocket for missing the payment — most likely including a lower house payment.

Few would argue that our present economy is not based on lending. Not only would housing be devastated if credit were not made available to consumers, but the business of car sales, most major appliances, most major home improvements and education would topple under their own weight, too. And that’s to name just a few areas of commerce. That being said, lending is based on borrowers actually paying back the loan granted to them. Showalter proved that paying back depends, in turn, on the presence of the character trait we identify as willingness to pay.

A conclusion that reasonably follows from this makes the claim that the foundation of our modern economy is this very character trait. It does not depend on race, creed, color or gender. But you could do worse than place a pretty firm bet on this occurrence: Erode the principle of willingness to pay and the economy will surely falter, no matter what monetary and/or fiscal policies are adopted by the political class. Strengthen it and the economy will grow in the face of whatever the political class chooses to do, or whichever way the ideological winds are blowing.

Which solidifies the need for the industry to take advantage of Showalter’s gift. The electorate and the judiciary need to ignore the propaganda — there is no other name for it — that has surrounded borrowers defaulting on home loans. The present cultural narrative is that the past recession was due solely to large financial institutions engaging in wholesale criminal conduct in both originating loans and in servicing them, particularly the servicing of defaulting loans.

The bulk of the evidence, of course, does not support this narrative. But under the influence of this broad sweep, a large portion of the citizenry and virtually all of the media have come to the view that enforcing notes secured by real estate is a semi-criminal activity. The key to protecting the willingness to pay has been overwhelmed by this narrative arc. The industry message should be simple and clear: Laws that nurture, protect and encourage the willingness to pay are good laws. Laws that discourage and punish it are bad.

Our industry must substitute this concept for the far more nebulous and completely misunderstood “moral hazard.” Both describe the same problem. Willingness to pay is a scientific term that stands a chance of resonating. Moral hazard does not. Most of our fellow citizens will likely equate this term — in light of the culture war presently ongoing in our society — with such conduct as abortion and other more socially grounded areas of public life. Words matter hugely and moral hazard is linguistically weak. On the other hand, willingness to pay is not.

THE HBR MOVEMENT AND WILLINGNESS TO PAY

Viewed in light of this characteristic, the HBR movement and the laws it has spawned are easy to evaluate. Do the HBRs protect or harm the willingness to pay?

Using the California HBR as a model, this law changed a set of rules that had existed for over 100 years and had proven over time to provide a rational, just and very successful way to allow the real estate markets to clear and adjust. This point was verifiable and argued in the state, but to no avail. California now has a law that does exactly the opposite. It makes foreclosing on a default loan extremely expensive, thus making it far more cost-effective to renegotiate loan terms than to enforce them. The willingness to pay is not considered in this process. It is as if this character trait does not exist (it clearly does). Or its existence is irrelevant to the social well-being (it is critical to that well-being). Or as if this law has no impact on this character trait (it clearly does).

So long as our nation has nationalized real estate finance with subsidized interest rates — which ignore the risks of default — there will be no obstacle in the way of this character trait’s erosion. To wit, Fannie Mae and Freddie Mac are under the auspices of the Federal Housing Finance Agency, while Ginnie Mae operates with Federal Housing Administration and Department of Veterans Affairs loans. They have had a more than 95% market share since 2008. The results will not show up for some time and can be denied by use of various tools of rhetoric, or spin. But when the markets change and the nationalization — particularly the subsidies — cease, the real estate crisis will worsen and private credit markets will deal with reality and the true cost of lending.

Ask yourself what the interest rate for home loans would be in the private market if the viewpoint of these borrowers in Richmond, Calif., became commonplace: The Castillos purchased their home with a zero-down loan, which was later modified. Under the loan mod, the borrower was paying about 50% of what the going-rate rent comes was for a similar house — lower counting income tax deductions.

But getting to own a home for no money down and paying a fraction of the cost of that house is not enough for these borrowers. They want more and hope that the city government’s attempt at eminent domain to purchase their loan will give them an even lower house payment.

When asked about the fairness of such a proposal, the reply concerning the loan, as told to Bloomberg, was: “We didn’t know any better,” one of the Castillo couple was quoted as saying. “I feel they should pay the consequences for giving us that loan.”

Willingness to pay is the critical character trait upon which our economy’s health is based. It is like the goose that laid the golden egg. Kill that goose for food and you will eat for a while. But, in the end, you will pay a huge price for your shortsighted conduct. The HBR movement is very much killing the goose that laid the golden egg. Our industry needs to educate society. That means the judges and the media in particular. The syllabus is fairly simple: A primer on the importance of this core character trait and the consequences of what happens to a society that erodes it.

Otherwise, to retread the broken-down engine metaphor, our linchpin economic driver of housing — and, frankly, pretty much all else built on credit — will be headed in the direction of the scrapyard.